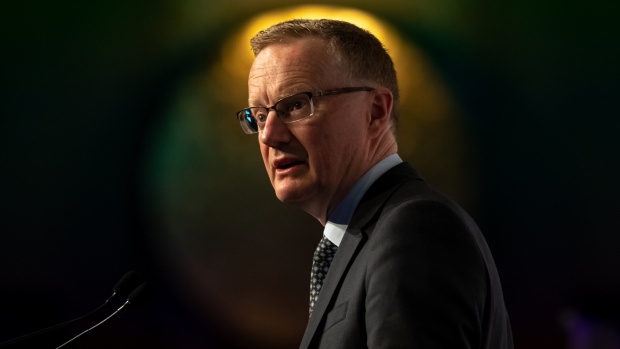 (Bloomberg) -- Australian central bank chief Philip Lowe shifted to a neutral policy outlook as he acknowledged increased economic risks at home and abroad, sending the nation’s currency down by more than half a U.S. cent.

“Over the past year, the next-move-is-up scenarios were more likely than the next-move-is-down scenarios. Today, the probabilities appear to be more evenly balanced,” Lowe said in the text of a speech in Sydney Wednesday.

The governor said the job market will remain the key swing factor: if Australians are finding jobs and wages rise faster, inflation should accelerate and “it will be appropriate to lift the cash rate at some point,” he said.

“On the other hand, given the uncertainties, it is possible that the economy is softer than we expect, and that income and consumption growth disappoint,” Lowe said. In the event of a sustained increase “in the unemployment rate and a lack of further progress towards the inflation objective, lower interest rates might be appropriate at some point. We have the flexibility to do this if needed.”

The Australian dollar bought 71.80 U.S. cents at 12:39 p.m. in Sydney compared with 72.42 cents before the speech. Three-year government bond yields dropped 6 basis points to 1.69 percent, set for the biggest one-day decline in more than a month.

The Reserve Bank’s step back from its tightening bias reflects weak household spending, slumping house prices and persistent weak inflation against the backdrop of slower global growth. The consistent bright spot has been the labor market. Unemployment has fallen to 5 percent and hiring remains strong, though as in other developed nations, this has failed to translate into the faster wage growth and higher inflation.

The RBA has kept its cash rate at a record-low 1.5 percent for 2-1/2 years, seeking to play a stabilizing role in the economy and willing to ride-out weak inflation to avoid encouraging heavily indebted households from borrowing further. Sydney property prices have fallen more than 12 percent from a July 2017 peak, having soared in the previous five years.

“What we are seeing looks to be a manageable adjustment in the housing market,” Lowe said. “It is not expected to derail economic growth. The previous trends in debt and housing prices were becoming unsustainable and some correction was appropriate.”

“We recognize that this correction will have an effect on parts of the economy. But our economy should be able to handle this, and it will put the housing market on a more sustainable footing.”

Lowe said he expects a pick up in household disposable income to provide a counterweight to the wealth effects of lower housing prices.

Among other points the governor made:

The RBA will release its quarterly update of forecasts for economic growth, inflation and unemployment on Friday.

To contact the editors responsible for this story: Nasreen Seria at nseria@bloomberg.net, Malcolm Scott, Chris Bourke