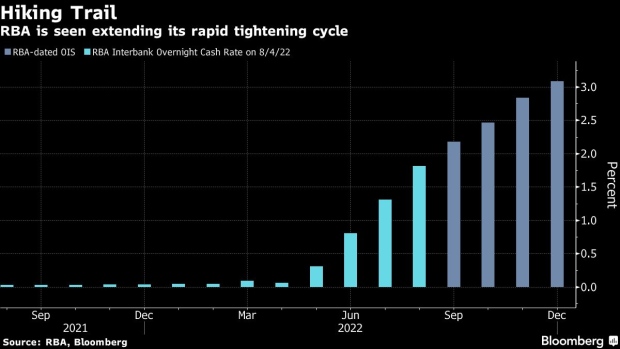 A pedestrian outside the Reserve Bank of Australia (RBA) building in Sydney, Australia, on Monday, May 2, 2022. Australian bonds sold off as investors anticipate the nation’s central bank will raise interest rates on Tuesday for the first time since 2010. , Bloomberg

(Bloomberg) -- Australia’s central bank lifted its inflation and wage growth forecasts while predicting unemployment will remain under 4% through mid-2024, underscoring the need for even tighter monetary policy.

Headline inflation is seen hitting 7.75% by December, the Reserve Bank said Friday in its quarterly Statement on Monetary Policy. Both the headline and core measures are predicted to remain well above the RBA’s 2-3% target over the next year before hitting the top of its band at the end of the forecast period in December 2024.

The outlook assumes the cash rate will rise to 3% by December from 1.85% at present and then “decline a little” by end-2024, the RBA said. The exchange rate is assumed to be unchanged.

The RBA reiterated that the rate-setting board is committed “to do what is necessary” to ensure inflation returns to target. It highlighted the effect of high inflation and cost-of-living pressures on wage- and price-setting behavior as a key uncertainty. The concern is a shift in inflation expectations could result in higher consumer prices being more persistent.

“Indeed, retailers have indicated in liaison that they are now more willing to pass on input cost pressures to consumers, rather than accepting lower margins,” the central bank said, while noting that inflation expectations remain “well anchored” so far.

The RBA repeated that the board is seeking to tighten policy “in a way that keeps the economy on an even keel.”

Economists predict the RBA will raise rates by another 50 basis points in September to 2.35% in what would be the steepest pace of increases since 1994. The cash rate was 0.1% when the tightening cycle began in May.

“The forecasts and especially the further upward revision to inflation suggest that additional tightening is required, with the prudent approach clearly to get to neutral sooner rather than later,” said Su-Lin Ong, head of Australian economic and fixed-income strategy at Royal Bank of Canada.

She expects the RBA will raise rates by another 50 basis points in September and then take a step down in the pace of tightening after that.

The forecasts for another supersized hike come even after the rate-setting board gave itself some wriggle room this week to adjust the pace of future tightening. Governor Philip Lowe said Tuesday after delivering a 50 basis-point increase for a third straight month that while further hikes are expected in the months ahead, the board “is not on a pre-set path.” The size and timing of future moves will be guided by incoming data, he added.

Australia’s A$2.1 trillion ($1.5 trillion) economy emerged strongly from the pandemic. It has the tightest labor market in almost half a century, high levels of savings and robust business sentiment.

But as the RBA’s tightening gathers pace, cracks are beginning to emerge: property prices are falling fast, retail spending is cooling and household sentiment has weakened. The central bank downgraded its economic growth forecasts for this year and next in today’s statement.

The RBA forecasts the economy will expand 3.25% this year, supported by consumer spending and a recovery in services exports. It is then seen easing to 1.75% in each of the following two years as higher borrowing costs begin to weigh on growth.

One factor supporting economic growth is stronger prices for Australia’s key exports that have helped boost the trade surplus to a record high.

“Higher consumer prices, rising interest rates and declining housing prices are expected to weigh on growth in private spending, at the same time as growth in public demand slows,” the RBA said. “Offsetting this to some extent, the elevated terms of trade will boost national income substantially.”

The RBA predicted a decline in commodity prices which would see a fall in the terms of trade in the period ahead. Other risks to the outlook include: