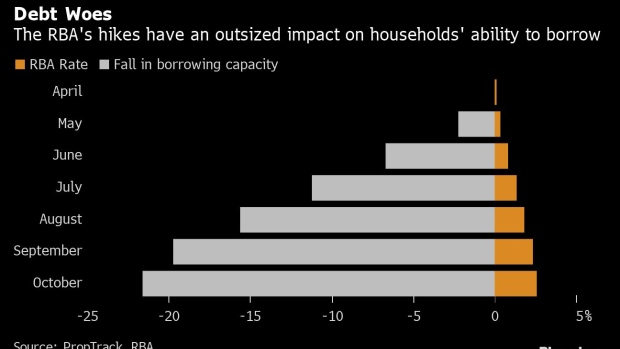 “Household income growth has not kept pace with inflation,” the RBA said in its semi-annual Financial Stability Review released in Sydney Friday. “This has left households with less capacity to meet their rising housing costs -- loan payments or rent -- while maintaining their consumption and rate of saving.”

The RBA said it will closely monitor leading indicators of financial stress as risks mount for some vulnerable households, while acknowledging balance sheets are in “strong shape” overall.

The central bank is in the midst of its most aggressive policy tightening in a generation, having delivered 2.5 percentage points of hikes since May. Governor Philip Lowe has signaled the need for further increases ahead in the struggle against inflation, even as he surprised markets by pivoting to a smaller hike this week.

The RBA’s tightening has already sent the property market sliding, with prices in bellwether Sydney falling for an eighth straight month in September. Economists predict the RBA’s cash rate will peak at around 3.2%, from 2.6% now, while money market pricing is slightly more aggressive at 3.6%.

Still, the RBA’s modeling shows the share of households at high risk of defaulting will likely remain low over the coming years, based on its central scenario for employment and income growth. If economic conditions deteriorated further than assumed, however, “a large share of households would be expected to fall into arrears on their mortgages,” it warned.

A majority of outstanding Australian mortgages are on variable loans with around 35% on fixed-rate terms, some two-thirds of which are due to expire by end-2023.

The RBA’s analysis shows most of these fixed-rate borrowers will face increases in borrowing costs of 3-4 percentage points when they roll over to variable rates, based on current market pricing.

Among other issues in the review of the financial system, the central bank found: