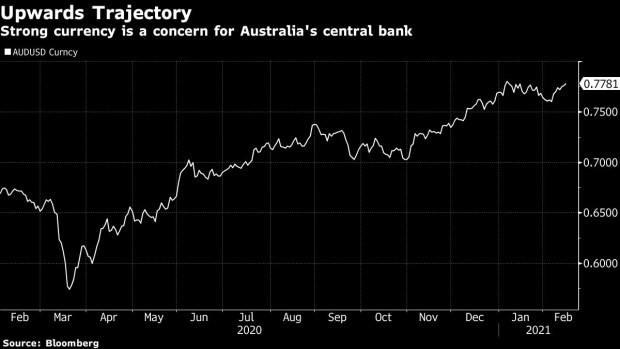 The Sydney Opera House and a passing pedestrian are reflected in a window in Sydney, Australia, on Tuesday, Oct. 13, 2020. Australia last week released a fiscal blueprint that pushes debt and deficit to a peacetime record just hours after the central bank signaled a willingness to ease further as both arms of policy press to drive down unemployment. Photographer: Brent Lewin/Bloomberg , Bloomberg

(Bloomberg) -- Australia’s central bank expects “very significant” monetary support will be needed for some time and it’ll take years to meet its inflation and unemployment goals, according to minutes of its February meeting, when the board extended a quantitative easing program.

“The bond purchase program had helped to lower interest rates and had contributed to a lower exchange rate than otherwise,” the Reserve Bank said in the minutes released in Sydney Tuesday. “Given this, it would be premature to consider withdrawing monetary stimulus.”

The RBA announced two weeks ago it was extending its QE program by a further A$100 billion ($77.8 billion) and doesn’t expect to raise interest rates until 2024. Governor Philip Lowe and his board are trying to keep close to global peers that have sought to stamp out premature tapering speculation.

“Members concluded that very significant monetary support would be required for some time, as it would be some years before the bank’s goals for inflation and unemployment were achieved,” the RBA said.

The Australian dollar was modestly higher after the release and traded at 77.93 U.S. cents at 11:33 a.m. in Sydney.

While Australia is enjoying a V-shaped recovery with Covid-19 largely under control, boosting confidence and fueling spending and hiring, the economy’s small stature in the global monetary marketplace requires the RBA to stay in the slipstream of major central banks. If Australia were to step outside that line, it would risk sending the currency soaring and damage to exports and jobs.

“A number of central banks in other advanced economies had announced extensions of their bond purchase programs to at least the end of 2021,” the RBA said, adding that there was widespread market expectation that its program would also be extended in some form. If the central bank had allowed QE to end in mid-April, the currency would likely have risen, it said.

The central bank is monitoring the effects of easy policy on the economy and said there were few signs of lending standards deteriorating at this point.

The RBA “acknowledged the risks inherent in investors searching for yield in a low interest rate environment, including risks linked to higher leverage and asset prices, particularly the housing market,” the central bank said. “The board concluded that there were greater benefits for financial stability from a stronger economy, while acknowledging the importance of closely monitoring risks in asset markets.”

The QE program aims to restrain the currency, which has been fueled by Australia’s relatively stronger health situation and high commodity prices, as well as massive offshore stimulus programs. The Aussie dollar has surged 35% since its March 2020 nadir of 55 U.S. cents.

The RBA earlier this month released updated forecasts showing Australia’s economy will grow 3.5% over both 2021 and 2022 and unemployment will fall to around 6% by the end of this year and 5.5% at the end of 2022. Economists predict the jobless rate slid to 6.5% in January ahead of labor force data due Thursday.

The central bank remains concerned about how Australia’s economy will adjust to some government programs expiring, with the signature job subsidy due to conclude at the end of March.

“As temporary income support measures tapered or ceased, household income was expected to decline through the middle of 2021,” it said.