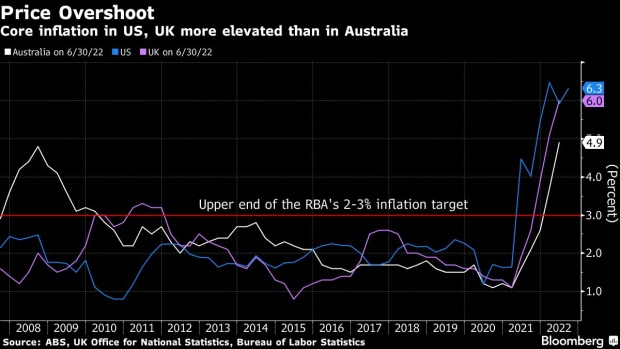 Philip Lowe, governor of the Reserve Bank of Australia (RBA), during the AFR Business Summit in Sydney, Australia, on Wednesday, March 9, 2022. An interest rate rise in Australia later this year is "plausible," Lowe said, as Russia's invasion of Ukraine creates a new supply shock that will prolong a period of elevated inflation. , Bloomberg

Most economists surveyed by Bloomberg see a fifth straight half percentage-point hike by the Reserve Bank on Oct. 4 to take the cash rate to 2.85%, before opting for smaller hikes going ahead. Money markets have a similar base case. That’s the latest take on recent signals from Governor Philip Lowe that he is keen to downshift to quarter-point moves at some point.

There are dissenters from the consensus: Commonwealth Bank of Australia and AMP Capital Markets are sticking with quarter-point calls for Tuesday. That’s despite Westpac Banking Corp., National Australia Bank Ltd. and Royal Bank of Canada raising their forecasts to a half-point from a previous quarter-point.

“It’s going to be a very tricky communication challenge,” said Giulia Specchia, a macro strategist at UBS Group AG. “If they under-deliver on what’s priced in the currency takes a hit and that’s added pressure for inflation. At the same time, they cannot be as aggressive as the US where mortgages are fixed.”

About 60% of the mortgage book in Australia is on variable rates, meaning policy transmission is much more potent than in the US, where home loans are typically fixed for 30 years.

At the same time, the Federal Reserve’s rapid-fire rate hikes have sent the dollar soaring and other countries’ currencies tumbling. Australia’s has fallen 5% in the past three weeks alone and is trading around 65 US cents.

That explains why many investors are taking Lowe’s dovish signal in their stride.

The RBA’s desire to slow the pace of hikes together with the commodity exporting nation’s stronger-than-expected fiscal position is making Australian government bonds a global outperformer, said James Wilson, a senior portfolio manager in Melbourne at Jamieson Coote Bonds, which manages $3 billion.

Overnight-indexed swaps imply a peak in the RBA’s cash rate of 4.1% by April 2023. Economists reckon the RBA will end its tightening campaign at around 3.35%, compared with 4.2% for the Fed and 3.75% for New Zealand and Canada.

So even if the RBA delivers a half-point increase this week, its accompanying statement is likely to sound dovish compared to the Fed and Reserve Bank of New Zealand, said Andrew Ticehurst, a rates strategist at Nomura Holdings and one of the more hawkish RBA watchers.

“We do not lean too heavily on RBA policy guidance in determining our cash rate outlook,” said Ticehurst, who sees the central bank hiking by another half-point in November.

That may be because Lowe still has some work to do after communication missteps during his rapid policy pivots over the past year.

The RBA faces a government-initiated review and has already carried out internal assessments of pandemic-era policies that concluded it damaged its credibility during a disorderly exit from yield-curve control in 2021.

“It will take a time to heal wounds for offshore investors to gain trust in the RBA after their change of tack last year,” said Wilson of Jamieson Coote Bonds.