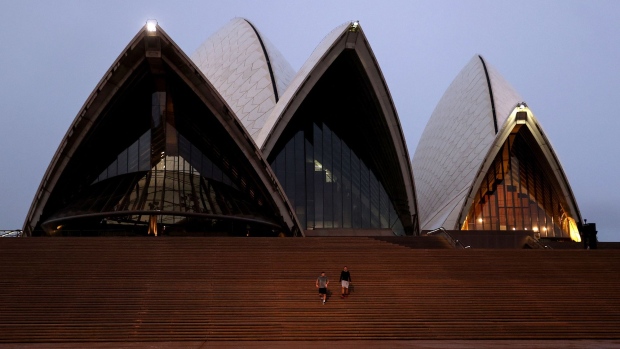 Pedestrians walk down steps at the near deserted Sydney Opera House forecourt during a lockdown imposed due to the coronavirus in Sydney, Australia, on Tuesday, June 29, 2021. Close to half of Australia’s population is now in lockdown as the nation struggles to contain a spread of the delta coronavirus variant. Photographer: Brendon Thorne/Bloomberg , Bloomberg

(Bloomberg) -- Australia’s central bank kept its monetary settings unchanged at the final meeting of the year and highlighted emerging risks to the recovery from the omicron strain of coronavirus that further supports its dovish stance.

The Reserve Bank held its key interest rate at 0.1%, saying accommodative policy is still needed to push unemployment low enough to drive wages higher. It reiterated that it won’t hike until inflation is well within the central bank’s 2-3% target, a goal it believes is unlikely to be achieved for about two years.

The RBA’s caution highlights the economic uncertainties of living with Covid-19, with omicron coming to light just as Australia’s economy emerged from protracted lockdowns. Restaurants are welcoming patrons again, domestic travel has resumed while sporting and entertainment action too has returned though the risk of lockdowns continues to loom.

“The emergence of the Omicron strain is a new source of uncertainty, but it is not expected to derail the recovery,” Governor Philip Lowe said in a statement.

The Australian dollar was little changed after the decision, trading at 70.58 U.S. cents at 2:35 p.m. in Sydney.

Economists say it’s still too early to assess the economic implications of omicron. Markets are undeterred and are also discounting Lowe’s argument that Australia doesn’t face the same price pressures that are emerging in the U.S., U.K. and New Zealand.

They see a 15-basis-point rate rise in May 2022 and two subsequent quarter-point increases -- with a chance of third -- over the rest of the year. That optimism comes on the back of strong data including household spending, job vacancies and business confidence.

Figures on Monday, though, highlight the RBA’s view: a closely-watched gauge of Australian job vacancies surged in November to be a record 44.2% above its pre-pandemic level, while a measure of inflation showed price pressures remained subdued.

Following today’s no-change decision, investor focus will shift to the RBA’s next meeting in February, when the board reviews its A$4 billion ($2.8 billion) a week bond buying program after last month dropping its yield target.

“In reaching its decision in February, the Board will be guided by the same three considerations that it has used from the outset of the program: the actions of other central banks; how the Australian bond market is functioning; and, most importantly, the actual and expected progress towards the goals of full employment and inflation consistent with the target,” it said in the statement Tuesday.

Most economists expect the RBA will reduce its purchases and some see it scrapping the program altogether. Bond traders are already sending signals to end quantitative easing in the face of fading new issuance from the government. An expected acceleration in tapering by the Federal Reserve in the face of surging U.S. inflation will also be influential in Lowe’s thinking.