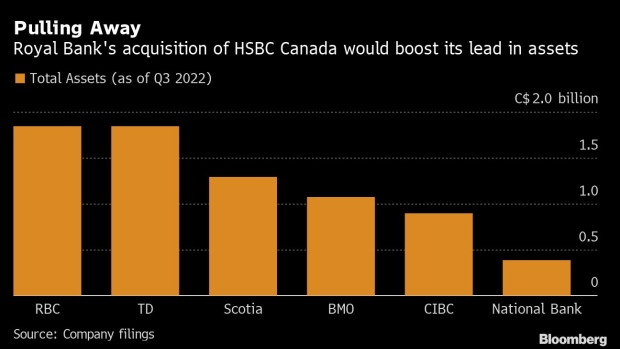 Dave McKay, president and chief executive officer of RBC, during the Canada FinTech Forum in Montreal, Quebec, Canada, on Monday, Nov. 7, 2022. The theme of the 9th edition of the event is "Succeeding in the Next Phase of Financial Services Digitization." , Bloomberg

Royal Bank’s rationale for buying HSBC Canada, the country’s seventh-largest bank, for C$13.5 billion ($10 billion) centers on its ability to wring costs from the business while cross-selling new products such as credit cards and mutual funds.

“It’s a unique and once-in-a-generation opportunity to leverage all the investments we’ve already made in building a world-class retail and commercial bank in Canada,” Royal Bank Chief Executive Officer Dave McKay said on a conference call with analysts Tuesday.

The Toronto-based bank is buying the unit after building up a large capital cushion early in the Covid-19 pandemic, when Canadian regulators prevented banks from buying back shares or increasing dividend payments.

“Five or seven years ago, you never would have thought that the banks could make such large acquisitions with only cash,” Rob Wessel, managing partner at Toronto-based Hamilton Capital Partners, said in a BNN Bloomberg Television interview. “Royal is already a formidable institution. So it just adds even more scale and even more dominance in the domestic market.”

Royal Bank plans to achieve about C$740 million in pretax expense synergies by combining information-technology systems and cutting costs from operations, real estate and shared services. The deal is expected to add 6% to the company’s estimated 2024 consensus earnings per share, and Royal Bank’s common equity tier one ratio would exceed 11.5% after the purchase is completed.

Royal Bank plans to keep the “vast majority” of HSBC Canada employees, though it’s too early to tell how many jobs may be eliminated, McKay said on a call with reporters. Royal Bank currently has 6,000 open jobs it’s looking to fill, so it views the HSBC deal partly as talent acquisition, he said.

Not included in earnings estimates is the potential for Royal Bank to cross-sell other products to its new customers. Royal Bank estimates that 19% of its clients have a full suite of transaction, investment, borrowing and credit card accounts with the company, compared with only 8% for HSBC Canada.

The customers Royal Bank is acquiring also skew toward high-net-worth individuals and commercial clients that do business abroad, and HSBC Canada will provide new capabilities in multicurrency accounts and trade finance, executives said on a call.

HSBC has agreed to refer customers moving to Canada to Royal Bank, executives said, a benefit in a country that sees immigration as a key economic growth strategy.

The acquisition doesn’t derail Royal Bank’s plans to expand its presence in US wealth management and commercial banking, and the bank’s larger size in its home market will eventually make deals to grow in those businesses easier to do, McKay said.

“Doing this one transaction, albeit on the larger side, does not preclude us from executing our long-term strategic diversification strategy in the US,” McKay said on the media call.

The deal, slated for completion by late 2023, will require approvals from Canada’s Office of the Superintendent of Financial Institutions, its Competition Bureau and the Department of Finance Canada.

The finance department said Tuesday that it may take into account the interests of consumers and business customers, the level of competition in the sector and the deal’s consequences for the stability of the financial sector.

“The minister of finance has the authority to impose any terms and conditions and to require any undertaking that she considers appropriate,” the department, led by Chrystia Freeland, said in a statement.

Royal Bank said the deal would increase its global competitiveness “without compromising Canadians’ access to a competitive, diverse market here at home.” The country has 50 banks and “hundreds of credit unions and fintechs,” Royal Bank said, noting HSBC’s small size in the country, accounting for about 2% of Canadian deposits and mortgages.

--With assistance from Derek Decloet and Brian Platt.