Royal Bank of Canada has delivered the most emphatic signal yet that Canada's lenders are putting the worst of COVID-19 behind them, unveiling an outright reversal of total loan-loss reserves that helped drive a profit beat in the latest quarter.

RBC said on Thursday that during its fiscal second quarter it released $96 million in money that had been set aside for loans that could go bad. A year earlier, when there were fears that the COVID-19 pandemic could drive a surge in loan defaults, RBC booked $2.8 billion in provisions for potential loan losses.

The dramatically improved credit picture powered RBC's profit in the three-month period that ended April 30 as net income surged 171 per cent to $4 billion, compared to $1.5 billion a year earlier. On an adjusted basis, RBC earned $2.79 per share; analysts, on average, were expecting $2.51. 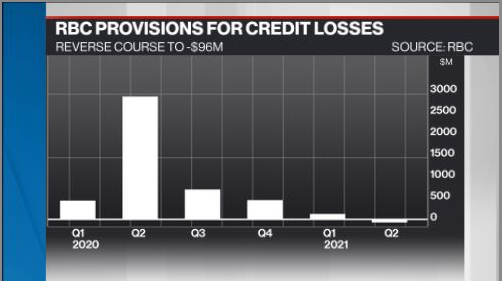 "While there is reason for optimism as recovery continues to take hold, we know the pandemic’s path forward still poses challenges. We remain firmly committed to helping our clients thrive and communities prosper, and to being an enabler of a more inclusive and sustainable future," said RBC Chief Executive Officer Dave McKay in a release.

RBC saw profit growth in all of its major divisions in the latest quarter, most notably in its core personal and commercial (P&C) operations where net income nearly quadrupled year-over-year to $1.9 billion as provisions shrank and loan activity picked up. 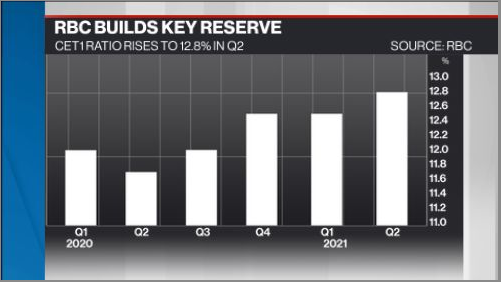 The bank's capital markets unit also stood out, with net income reaching $1.1 billion compared to $105 million a year earlier when loan-loss provisions weighed on the unit. But it wasn't just credit driving the performance in the latest quarter, as RBC noted Thursday that the division benefitted from record revenue from its investment banking operations.