Financial firms are facing a major challenge after the coronavirus pandemic shook up the labor market, according to the head of Canada’s largest bank: They can’t acquire enough talent.

With tech firms “reinventing our society” through artificial intelligence, the Internet of things and blockchain, demand for workers with math and coding skills is so great that banks are struggling to hire the people they need, Royal Bank of Canada Chief Executive Officer Dave McKay said in an exclusive interview.

“We’ve never faced more competition for talent, and particularly acute in the engineering, AI, data, mathematics and coding space,” said McKay, 58. The shortage of skilled employees is being exacerbated by early retirements, he said.

The talent shortage is severe in both the U.S. and Canada, the two countries from which RBC derives about 85 per cent of its revenue. The U.S. “could attract the best and brightest and you have historically, but you’re at risk of not doing that” partly because of restrictive immigration policies, McKay said.

In Canada, meanwhile, the borders are open to newcomers but high housing costs are threatening to scare away the skilled workers needed to fill those slots, he said. That’s one reason RBC decided to open a technology center last year in Calgary, the center of Canada’s oil industry, where real estate is far cheaper than in Toronto, New York or Silicon Valley.

Canada doesn’t have enough engineering training spots in its universities, and it often can’t keep the international students it accepts in those schools because they return to their home countries or move elsewhere, McKay said.

“We have the opportunity to reinvent everything from medicine to education, to banking, to commerce, transportation, to climate. We are reinventing the world and we don’t have the talent to do that,” McKay said. “We’re paying for the education as taxpayers, and we’re losing the talent.” 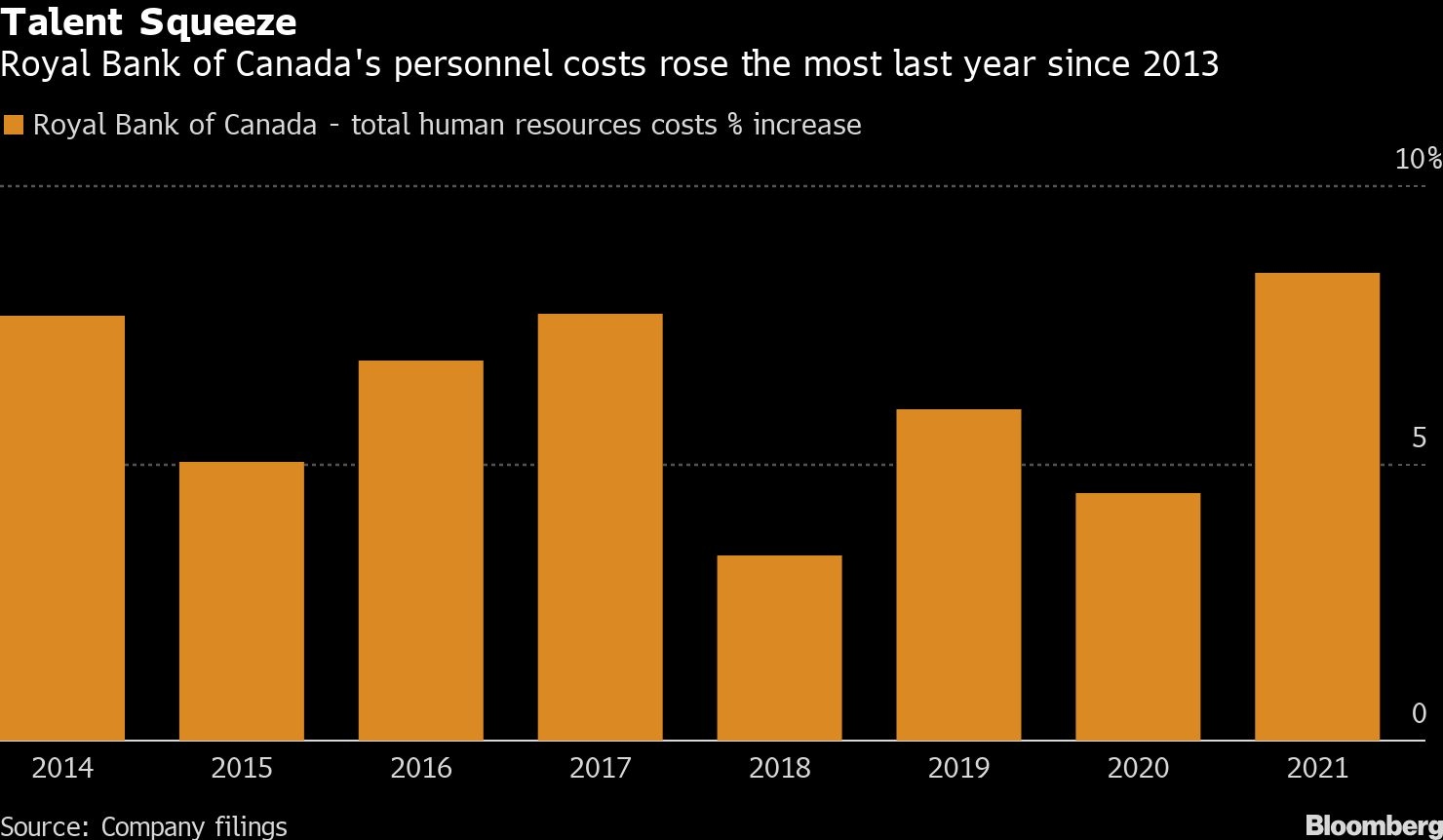 Royal Bank increased its workforce by about 2 per cent last year, but its total human resources costs -- a figure that includes salaries, bonuses, benefits, retention pay and stock-based compensation -- rose 8.4 per cent. That was the biggest percentage increase since 2013.

Technology is an important part of Royal Bank’s strategy. McKay is quick to tout the startups that Royal Bank has built, acquired or invested in through its RBC Ventures unit, including the OJO home-search platform and the Ownr digital business-launching service.

Those services, while ancillary to Royal Bank’s core banking businesses, help funnel new customers into the system and provide major opportunities for cross-selling, he said. They’re also vital to Royal Bank’s strategy for defending its turf against the likes of Alphabet Inc., Apple Inc., Amazon.com Inc. and Shopify Inc., which are backing their way into financial services, he said.

Beyond investments in RBC Ventures, the bank also is looking to acquire wealth management firms in the U.S. and Europe. But he has no interest in buying a U.S. retail banking franchise -- as rival Bank of Montreal is trying to doing with its proposed US$16.3 billion deal for Bank of the West -- because it would take at least CUS$30 billion (US$24 billion) of capital to acquire the scale needed to be competitive, he said.

The surge in COVID-19 cases caused by the omicron variant is the largest near-term risk, he said. Containing the health risk will be key to getting the economic recovery on track, he said.

“Omicron is a real challenge for the next eight weeks or so,” McKay said. “I hope it’s eight weeks, but we do expect to get through this and we do expect growth to recover.”