RBC Capital Markets downgraded its rating on Air Canada to the equivalent of hold from buy, citing a “heightened risk” that COVID-19 variants will cap the stock’s near-term performance.

“The [Delta] variant has undoubtedly impacted the pace of the recovery while also adding a layer of uncertainty regarding the timing of the industry’s ‘return to normal,’” Walter Spracklin and Ryall Stroud, analysts at RBC, wrote, arguing investors should prepare for a more stubborn recovery that stays “lower for longer.”

Tuesday’s downgrade represents the first time the bank’s analysts have lowered Air Canada’s stock rating since 2013. Their outperform rating remained untouched through the thick of the pandemic, as the airline slashed capacity and global travel collapsed.

But new data indicates the recovery will be “choppier” and longer than previously assumed, Spracklin and Stroud wrote.

And with Air Canada’s stock now up around 99 per cent from its pandemic lows, they believe “entirely external” factors will keep shares from moving meaningfully higher.

“With global case rates trending in the hundreds of thousands per day, we believe there is a distinct possibility that new virus variants will emerge and disrupt air travel in a similar fashion that the Delta variant has,” Spracklin and Stroud wrote.

They also argued pent-up demand to travel and reunite with family and friends has peaked, and is now waning. And as the airline industry enters the seasonally slower fall and winter months, the analysts see few catalysts in the offing. 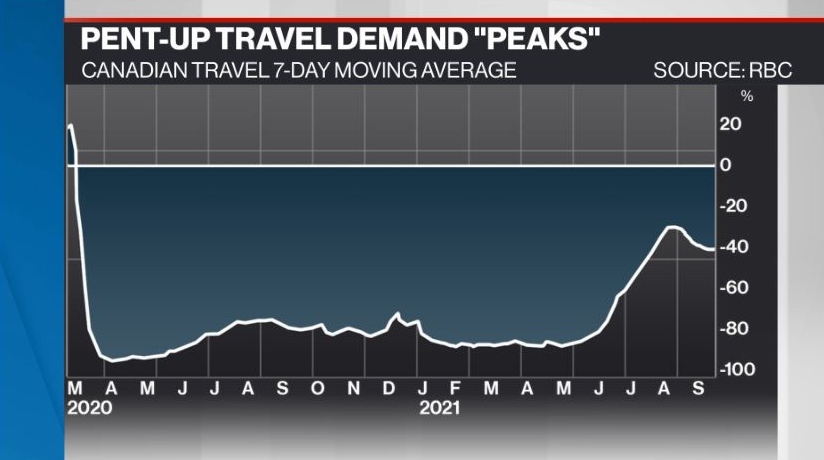 Spracklin and Stroud added that easing of red tape for international travel, a boost in business travel and the widespread adoption of Merck’s COVID-19 medication would make them more bullish on Air Canada’s stock.