RBC and CIBC raise their dividends

Canada’s two largest banks laid down a vote of confidence that consumers and businesses will keep making loan payments even if inflation and rate increases throw the brakes on the economy.

Royal Bank of Canada surprised analysts on Thursday by releasing $342 million in provisions for credit losses in the fiscal second quarter, confounding estimates that the bank would stockpile an additional $241.2 million in capital to protect against loans going bad. Toronto-Dominion Bank set aside $27 million in provisions, about a tenth of what analysts expected.

The banks’ bet on potential defaults contrasts with the gloom that has roiled markets in recent weeks. While investors have been curtailing their risk appetite because of expectations that central banks’ aggressive rate-hike campaigns will squelch economic growth -- and may fail to rein in inflation -- the banks are signaling that strong consumer balance sheets and a historically strong labor market will keep debt payments flowing. 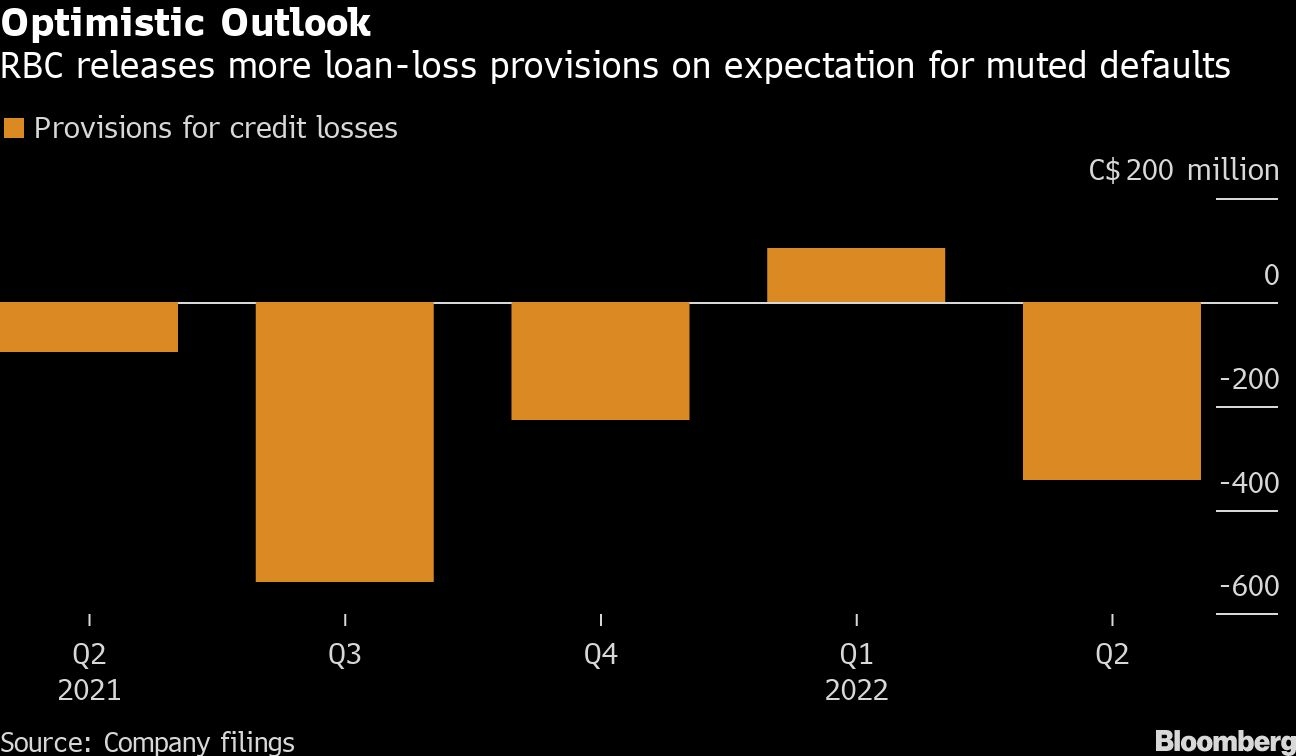 The lower-than-estimated provisions helped profit at both of the Toronto-based banks top analysts’ projections for the three months through April. Royal Bank’s adjusted profit was $2.99 a share, topping analysts’ $2.69 average estimate. Toronto-Dominion’s profit excluding items was $2.02 a share, beating the $1.93 average projection.

The banks’ business clients also are betting on continued strength and are ramping up borrowing to meet consumer demand. Royal Bank reported $12 billion in small business loans in its Canadian banking unit, up 8.1 per cent from a year earlier. Toronto-Dominion’s Canadian retail segment reported $100.9 billion in average business loans and acceptances for the quarter, a 16 per cent gain from a year earlier.

“Commercial loans for all the banks look very strong,” Paul Gulberg, an analyst at Bloomberg Intelligence, said in an interview. “They’re all doing really well and growing a lot.”

The benefit of the smaller-than-expected provisions helped make up for more negative aspects of the banks’ earnings reports. Royal Bank’s capital markets division saw revenue fall 14 per cent from a year earlier, hurt by declines in both advisory fees and trading revenue, which had been expected to benefit from the market turbulence.

The banks are also facing higher expenses to pay employees, with Canada’s unemployment rate hovering at the lowest since 1976. Toronto-Dominion’s non-interest expenses climbed 5.3 per cent from a year earlier to $6.03 billion. And while Royal Bank held its non-interest expense growth at 0.9 per cent for the quarter, the lender said earlier this month that it’s spending more than $200 million on pay increases, boosted retirement benefits and other incentives.

At Canadian Imperial Bank of Commerce, the country’s fifth-largest lender, non-interest expenses rose 13 per cent from a year earlier to $3.11 billion. That contributed to second-quarter profit missing analysts’ estimates by one cent. However, CIBC Chief Executive Officer Victor Dodig has signaled he’s comfortable with rising costs, saying the bank will invest in technology and front-line, revenue-generating employees this year to help spur growth.