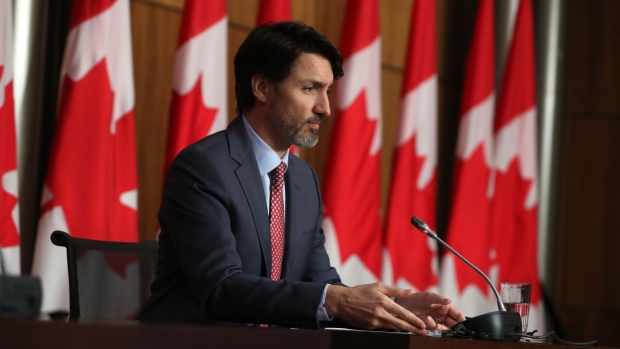 Justin Trudeau, Canada's prime minister, listens during a news conference in Ottawa, Ontario, Canada, on Friday, March 19, 2021. Trudeau said that the U.S. and Canada are finalizing the details on the AstraZeneca Covid-19 vaccine shipment. , Bloomberg

McKay said the government’s Covid-19 support programs have resulted in an extra C$180 billion ($143 billion) in cash in consumers’ accounts that, along with low interest rates and corporate cash holdings, already have the economy poised for a rebound. The government should instead take a “read-and-react” approach to further stimulus, he said.

“I would counsel that we don’t want to overdo this,” McKay said in response to reporters’ questions after the company’s annual meeting. “Why not keep our powder dry and see how we recover, knowing that we’ve got this dry powder to interject quickly -- as we’ve shown we can do in the past year -- if things aren’t playing out the way we hoped.” The CEO didn’t mention Trudeau by name.