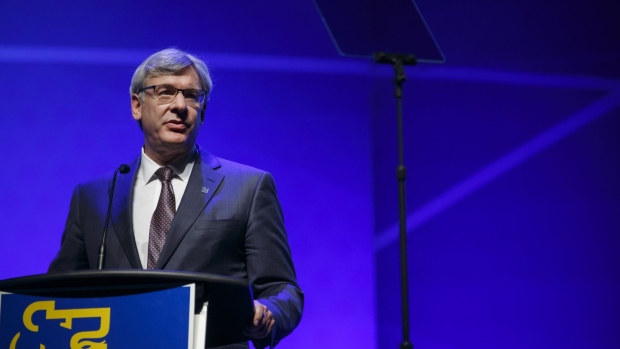 (Bloomberg) -- Royal Bank of Canada Chief Executive Officer David McKay says Canada is in a race to vaccinate enough people in the next three months to safely reopen its economy.

About 4 million to 4.5 million high-risk Canadians will likely have to be vaccinated before the country can reduce restrictions, and that can be accomplished in about 100 days, McKay said Monday at an investor conference hosted by his bank.

In the meantime, Canada’s economy will remain challenged by the Covid-19 pandemic, which may require more stringent lockdowns that will slow the recovery, he said.

The most heavily-populated regions have been ratcheting up restrictions for weeks. Ontario, Alberta and other provinces have forced restaurants, retailers and other businesses to close or operate at limited capacity; Quebec has even imposed a nightly curfew at 8 p.m.

“How 2021 progresses is really very much about how fast we can source vaccines and deliver them,” McKay said. Canada has inoculated about 1% of its population against Covid-19.

Once vaccinations are widespread enough that a reopening can take place, McKay said he’ll be “on the more bullish side as far as the speed of recovery.” Consumers have “significant savings” in their accounts and there’s enough pent-up demand to fuel a strong recovery later this year, he said.

“If anything, there could be a little bit of pent-up inflation from excess demand in the economy,” McKay said.

Read more: Canada Running Short of Vaccines Despite No. 1 Ranking in Orders

Bank of Montreal Chief Executive Officer Darryl White echoed those themes at the conference, saying the economic recovery will likely be stronger than those that follow ordinary recessions because of the “substantial savings” consumers have built up with the aid of government stimulus programs.

“We really don’t anticipate too much of a release on those savings until a return to travel, a return to density comes around, hopefully later this year,” White said. “But when it does, we actually see a very rapid acceleration, both on the consumer side and on the business side.”