The bank had been expecting the shares to recover from a streak of underperformance that’s driven the Russell 2000 Index into correction territory.

Companies with market values of about US$2 billion or less tend to outperform at times when inflation expectations are rising. But that hasn’t been the case recently, even with consumer prices in the U.S. surging at the fastest pace in four decades.

The Russell 2000 has dropped almost 6 per cent in 2022, deepening its selloff since November, when the omicron variant was found in South Africa. It now sits more than 13 per cent below that month’s all-time high, exceeding the 10 per cent drop that’s an official mark of a correction, while the S&P 500 is down less than 5 per cent from its peak.

“We aren’t ruling out a catch-up trade by small caps in early 2022. But we’re no longer counting on it,” Lori Calvasina, head of U.S. equity strategy at RBC Capital Markets, wrote in a note to clients. “We think a better way to play the early 2022 rotation is through large-cap value or cyclical sectors.” 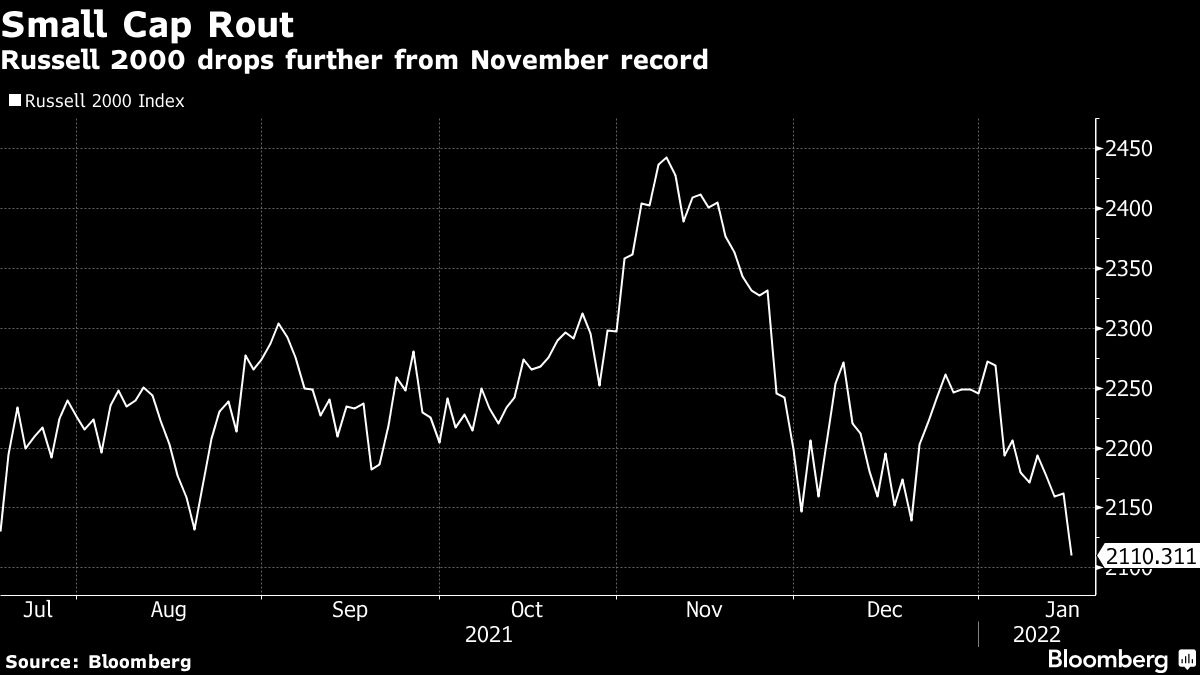 Small caps were on a tear last year after underperforming bigger companies earlier in the pandemic. They briefly outpaced shares of larger companies in November on wagers they would raise prices to offset inflation.

But worries about the omicron variant of COVID-19 pummeled the U.S. small-cap market in early December, with shares of financial, technology, health-care and energy companies falling.

Value stocks, which trade at low multiples of their book value, are beating growth stocks this year, as investors scoop up cyclical shares more closely tied to the domestic economy. But that hasn’t benefitted small cap companies in such sectors as much as their larger counterparts.

That could be due to tempered business optimism and the perception that smaller companies may have a tougher time managing COVID-19 disruptions than bigger companies, according to Calvasina. The Federal Reserve is also widely expected to kick off a cycle of interest-rate hikes in March. As interest rates climb, so will the cost of the loans that small businesses carry, she added.

“Small caps have at least a third of their debt in variable rate instruments,” Calvasina wrote in her note. “Equity investors often get nervous about small caps when interest rates are rising due to leverage.”