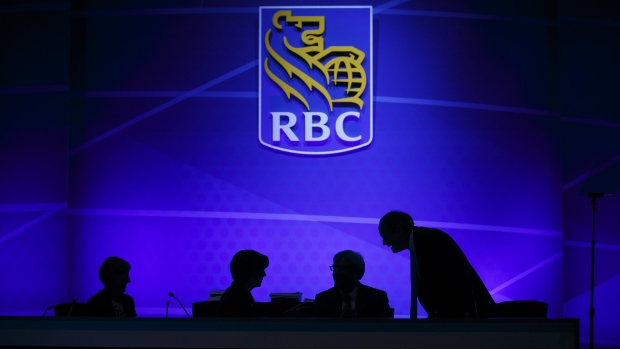 The silhouettes of executives are seen on stage during the Royal Bank of Canada (RBC) annual general meeting in Toronto, Ontario, Canada, on Thursday, April 6, 2017. , Cole Burston/Bloomberg

There’s a company in Toronto that has built programs to help new immigrants, keep track of car maintenance and tell homeowners what day to haul their trash to the curb. But the firm isn’t a software developer -- it’s one of Canada’s biggest banks.

Royal Bank of Canada has spent more than two years building a fintech startup within its operations. RBC Ventures Inc. now has about 150 employees working on nine projects in various stages of development out of a glass office tower near Toronto’s waterfront, two blocks south of the bank’s headquarters.

“We want to be known as the bank that goes beyond banking,” Mike Dobbins, who oversees corporate development at Royal Bank, said in an interview in his 17th-floor office at WaterPark Place. “My goal today is to build wonderful products that lots of people find useful. And if we get that right, I believe we have the pathways to grow more core clients.”

The efforts are partly a response to technology companies encroaching into areas once dominated by banks. Royal Bank cited home-remodeling website Houzz Inc., online-store provider Shopify Inc. and personal-finance company Credit Karma Inc. as examples of initiatives that could have been developed by banks capitalizing on access to clients and their data.

Canada’s second-largest lender by assets unveiled RBC Ventures at a June 13 investor event, where executives outlined a goal of attracting 5 million users to its digital offerings within five years, and ultimately converting 10 per cent into full-fledged banking clients. That would translate into 500,000 customers to contribute to Royal Bank’s objective of adding clients at triple its current rate. According to Dobbins, the aim is to reach people before they require banking services.

“If it works, it’s actually a really interesting concept -- I don’t know of a bank that has really tried to engage in this manner before,” CIBC World Markets analyst Robert Sedran said in an interview. “The idea of trying to engage with consumers before they’re customers is an innovative way at getting at the potential customer earlier, and it provides them an advantage.”

One example is RBC Ventures’ Arrive, which offers an internet portal for immigrants before they reach Canada and set up bank services. The initiative offers foreigners live chats and video calls with settlement experts from the nonprofit Centre for Education & Training, and a digital to-do list for their journey. Royal Bank is testing Arrive on people from India, and the team behind the effort has gone as far as picking up new arrivals at the airport to ask them questions about their needs to improve the product.

Drive, meanwhile, is a mobile app marketed as a “digital glove box” for your vehicle, keeping track of maintenance records, insurance details, recall notices and the vehicle’s value while also linking to outside services such as booking repairs with auto dealerships or tire service at home. Drive, introduced last year, has a 3.9-star rating out of five on Google Play’s app store. On Apple’s App Store, it’s rated four out of five. As of June, more than 800 auto dealers had signed on to the service, and more than 50,000 autos had been registered.

About 300,000 users are signed up for RBC Ventures services so far, according to the bank.

The initiatives have been built in-house with the exception of MoveSnap, a “personal moving concierge” for real estate brokers to help their clients simplify residential relocation, which was acquired by the bank. The app has been focused on Greater Toronto, where it was used in about 40 per cent of the moves in the past month, Dobbins said. Royal Bank is looking at expanding MoveSnap to other cities.

Other efforts under development include Butter, a website that organizes subscriptions; Finfit, a mobile app that aggregates bank and credit cards to monitor spending and credit scores; Ownr, a website that helps entrepreneurs start a business and design logos; and Get Digs, which facilitates payments between renters and landlords.

The most surprising success for Royal Bank has been GarbageDay, an email-and-text notification service that tells homeowners when to put out trash and recycling for curbside pickup. About 68,000 people in greater Toronto, Kitchener-Waterloo and greater Vancouver have signed up for GarbageDay, according to Royal Bank.

“When we looked at what things customers really wanted reminders about, this one item really, really resonated,” Dobbins said. “It went pretty viral.”

GarbageDay has been incorporated into an RBC Ventures program under development called HomeSprout, which helps homeowners manage and maintain their home. Those who signed up for GarbageDay can now join HomeSprout, Dobbins said.

Not everything may endure, Dobbins said.

Dobbins said he hopes some ventures will expand beyond Canada into the U.S., where Royal Bank has operations including an online bank and its Los Angeles-based City National unit.

“We have put chips down in all of the places we should,” he said. “We believe that this will add significantly to the accelerated growth that we’re looking for over the next five years.”

Royal Bank has the heft to take a chance on such fintech initiatives and risk failure without hurting the bottom line, according to CIBC’s Sedran.

“Failure is not getting the customer penetration they’re hoping for. Failure is dollars spent with no material advantage gained,” he said. “The luxury of their size and scale is that they have the ability to do some of this and not worry as much about what kind of tail-risk they’re taking on.”