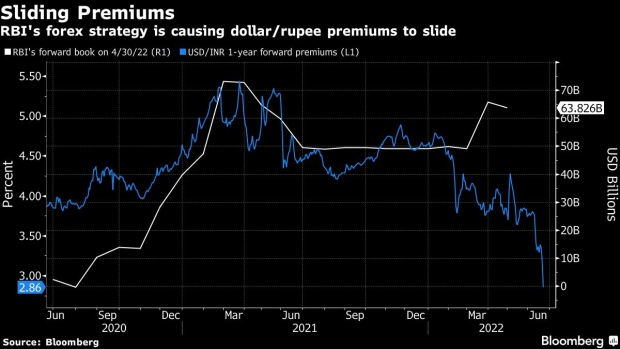 Indian rupee bank notes in a container at a grocery store, known as a kirana, in Bengaluru, India, on Monday, Jun. 21, 2021. The grocery is one of India's 20 million mom and pop stores which are emerging as key partners for Amazon, Mukesh Ambani's Reliance Industries, and Walmart's Flipkart online unit as they seek to dominate the lucrative $1 trillion Indian retail market. Photographer: Dhiraj Singh/Bloomberg , Bloomberg

(Bloomberg) -- India’s central bank is fighting on several fronts to slow the rupee’s decline to fresh records, with little respite in sight.

The Reserve Bank’s challenges include crashes in forward dollar premiums to rising open interest in futures that adds to pressure on the currency. Strategists say that the pressure will continue amid shrinking interest rate differentials with the US, elevated oil prices fueling domestic inflation and a widening trade deficit.

“The RBI has been intervening in all markets to defend the rupee,” said Dhiraj Nim, economist and FX strategist at Australia & New Zealand Banking Group Ltd. “The pressure on the rupee remains, and the central bank will have to continue intervening to smoothen the depreciation path.”

The rupee closed down 0.3% to 78.97 a dollar on Wednesday, extending this year’s losses to 5.9%. RBI’s stated stance is that it intervenes to curb currency volatility and not influence its direction. Below are charts showing the central bank’s intervention on different fronts.

The spot forex market has been the central bank’s traditional intervention route to ease currency volatility. The nation’s forex reserves are down $43 billion this year amid the interventions and revaluation on strength in the dollar. This time, the RBI has been careful in spending its reserves amid higher crude prices and record outflows from domestic equities.

QuantEco Research expects the currency to drop to 81 to a dollar by March, while substantial FX reserves and India’s long-term economic potential will buffer any precipitous decline of the currency.

The RBI has been dipping into its $64 billion long-dollar book to offset some of its spot intervention. The monetary authority is entering into buy/sell swaps to offset some impact of the spot sales on reserves and money market liquidity, according to Vivek Kumar, an economist at QuantEco Research. That has sent dollar/rupee forward premiums crashing to levels not seen in a decade.

The cash dollar shortage and fall in premiums may end up weighing on the rupee by encouraging importers to demand dollars and disincentivize any carry trades, according to Emkay Global Financial Services Ltd.

The RBI has been a late entrant into the offshore market. It allowed domestic banks to trade in overseas markets only two years ago. A special hub in the western Indian state of Gujarat, where an onshore NDF market has started, is also drawing liquidity.

The moves helped narrow the spread between onshore and offshore markets from 100 basis points in March 2020 to little difference between the two.

“If we want today, because of the presence of Indian banks, we can wipe out the arbitrage in two minutes,” RBI Deputy Governor Michael Patra, said on Friday. “The NDF market has now become an ally.”

The RBI has been active in the futures market in recent months. The impact was visible Tuesday as there was a huge build-up of open interest positions on expiry day, adding to pressures on the currency. The central bank is said to have rolled over some of its contracts to July maturity, a person familiar with the matter told Bloomberg News.

The RBI’s intervention in the futures markets is smart as they will not lose dollars with the contracts being settled in rupees while still influencing spot markets with smaller amounts, said Bhaskar Panda, a senior vice president at HDFC Bank Ltd.