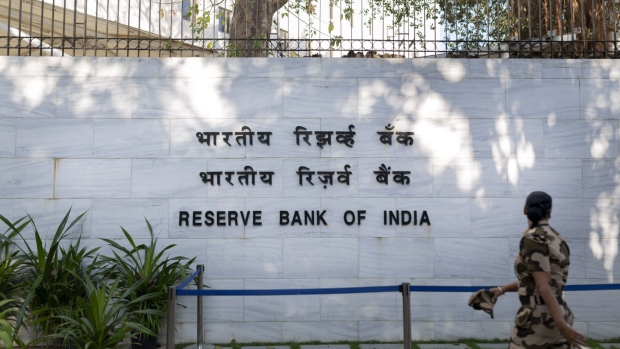 (Bloomberg) -- The Reserve Bank of India told bond market participants a recent measure to mop up excess liquidity isn’t a step toward changing its accommodative policy, according to people with knowledge of the matter.

In a meeting with executives from large banks on Tuesday, an RBI official assured them about its continued easy monetary policy, the people said, declining to be identified as the discussions were private. Setting the policy stance is the remit of the rate-setting panel, and the central bank’s plan to drain cash was just to modulate liquidity as it gradually unwinds pandemic-response measures, the official said.

Short-term bonds sold off on Monday following the RBI’s announcement of its first 14-day reverse repurchase operation since March, with traders surprised by the timing of the central bank’s actions. While there was consensus that the RBI will act to withdraw excess liquidity that had crashed money-market rates, most had expected it to only move later in the year.

Shorter-term rates had crashed late last year below even the reverse repo rate, raising concerns about distortions to asset pricing by banks. Quantum Asset Management Ltd. and IDFC Asset Management Ltd. have been among those forecasting that short-end rates will rise faster than the long-end as the RBI will have to act in 2021.

The yield on the 5.15% 2025 bond was down three basis points to 5.24% on Thursday after rising 16 basis points in the previous three sessions. In contrast, the benchmark 10-year yield is up only one basis point this week.

A RBI spokesperson didn’t immediately respond to an email seeking comment on the meeting.

“It is an important indication that the process of normalization has likely commenced, although we expect this to continue at a gradual pace, given vaccine uncertainty remains for now,” Sonal Varma and Aurodeep Nandi, economists at Nomura Holdings Inc. wrote in a Jan. 13 note.