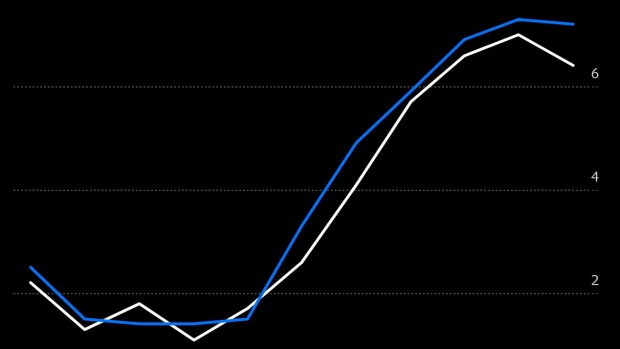 The Reserve Bank prefers to maintain the status quo, which requires its 2% inflation goal to be achieved over an undefined “medium term” horizon, it said Wednesday in Wellington. The proposal to add a specific time-frame is part of a five-yearly review of the remit. A second public consultation opened today.

“The Reserve Bank considers the remit best supports wellbeing by leaving the time horizon undefined,” the central bank said in the consultation document. “While specifying the time horizon in numbers of years or quarters may add to credibility and transparency, it would limit the flexibility of monetary policy. In this instance, the Reserve Bank views that the costs of specifying a target horizon outweigh the benefits.”

Finance Minister Grant Robertson has sought advice from the Treasury Department on whether the RBNZ should be asked to achieve its targets within a more specific time-frame.

The issue is relevant “in the context of the recent persistence of inflationary pressures, which have led to expectations that inflation will remain above target for several years,” the Treasury said in a document released last month.

Some central banks do have specified time horizons for their monetary policy goals, such as the Bank of Canada, which seeks to achieve its aims in six to eight quarters.

The RBNZ has historically interpreted the medium term to mean “the second half of a three-year forecast horizon,” the central bank said in the consultation document.

“This interpretation reflects the fact that monetary policy affects the real economy and inflation with a lag,” it said. “The use of the phrase ‘medium term’ -- rather than a defined period -- reflects that this lag can change over time depending on the structure of the economy, and the appropriate response will change depending on the shocks facing the economy.”

A risk of defining a horizon is that it may require the Monetary Policy Committee to return inflation to target more quickly than is optimal in some circumstances, the RBNZ said.

“Conversely, a specified time-horizon, even if it is not always optimal, can support the credibility of the inflation objective by anchoring inflation expectations,” it said.

To effectively support credibility, it is important that any specified time-horizon is achievable for the MPC, it added.

Both the RBNZ and the Treasury are due to advise Robertson on any recommended changes to the remit next year. A new remit must be issued by February 2024.