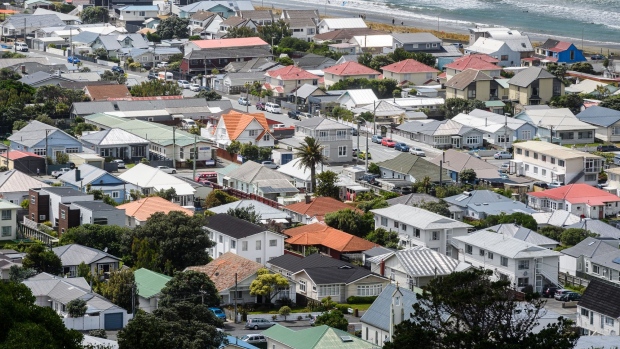 Adrian Orr, governor Reserve Bank of New Zealand, listens during an interview in Wellington, New Zealand, on Tuesday, March 10, 2020. Orr gave a speech on unconventional monetary policy, saying there is currently no need for it to be deployed. , Bloomberg

(Bloomberg) -- New Zealand Finance Minister Grant Robertson has given the central bank access to another tool to rein in the country’s rampant housing market.

Robertson has agreed to add debt serviceability restrictions to the list of potential macro-prudential tools available to the Reserve Bank, Governor Adrian Orr said in a statement Wednesday in Wellington. This would allow the bank to impose debt-to-income limits if it deemed them necessary to support more sustainable house prices, he said.

New Zealand policy makers are battling the hottest property market in the world, according to the Bloomberg Economics global bubble ranking, with median prices surging more than 30% in the year through May. The government has already changed tax rules for property investors in an effort to damp demand and the RBNZ has tightened loan-to-value ratios, which require borrowers to have a certain amount as a deposit.

Debt-to-income limits, already used in countries like England, mean someone can only borrow a certain multiple of their income to purchase a house.

“We consider that a DTI limit would be a complementary tool to mortgage Loan-to-Value Ratio restrictions as they address different dimensions of housing-related risk; DTIs reduce the likelihood of mortgage defaults while LVRs largely reduce losses to banks if borrowers default,” Orr said. “Although we do not have a remit to target house prices directly, our financial policy tools can help to ensure prices do not deviate too far from sustainable levels.”

While there are some early signs that the raft of new measures may eventually cool the housing market, a lack of supply and record-low interest rates continue to drive eye-watering price increases. The Real Estate Institute said yesterday that the median house price rose 32.3% in May from a year earlier -- the biggest annual increase since records began -- to NZ$820,000 ($584,000).

Robertson is primarily focused on tilting the playing field away from investors toward first-time buyers, many of whom have found themselves priced out of the market.

Orr said the minister agreed to add debt serviceability restrictions to the RBNZ’s toolkit “on the condition that any implementation is designed to avoid impact, as much as possible, to first-home buyers.” The bank’s analysis had demonstrated that any such restrictions “would impact investors most powerfully,” he said.

The RBNZ will now discuss with industry the feasibility of implementing a DTI limit and other debt servicing restrictions as part of its financial stability toolkit. Any decision on implementing debt serviceability restrictions will be preceded by a full public consultation process, along with a Regulatory Impact Assessment.

In a memo to Robertson also released today, the RBNZ estimated it would take six months or more to design and implement a DTI cap.