New Zealand’s central bank joined the global shift away from higher interest rates, saying its next move is more likely to be a cut and sending the kiwi dollar tumbling by the most in seven weeks.

“Given the weaker global economic outlook and reduced momentum in domestic spending, the more likely direction of our next OCR move is down,” Governor Adrian Orr said in a statement in Wellington Wednesday after leaving the official cash rate at 1.75 per cent. “Core consumer price inflation remains below our 2 per cent target mid-point, necessitating continued supportive monetary policy.”

The RBNZ’s pivot matches central banks around the world that are becoming more cautious about slowing global growth and downside risks to inflation. The Federal Reserve has signaled it may not raise rates at all this year, while the Reserve Bank of Australia has abandoned its tightening bias. Orr said those easier policy stances have placed upward pressure on the local currency.

“If they had remained a neutral outlier versus other central banks, the New Zealand dollar would have gone to the moon,” ANZ Bank New Zealand Chief Economist Sharon Zollner said in a note. “We continue to forecast that the next OCR move is down, but the risk is now that it comes earlier than our forecast of November, given the RBNZ’s tone has shifted to be overtly dovish a little earlier than we thought it might.”

Mar.27 -- European Central Bank President Mario Draghi discusses the potential need to soften the impact of negative interest rates. He spoke to a conference of ECB watchers in Frankfurt.

New Zealand’s dollar slumped 1.6 per cent after the statement. It bought 68.02 U.S. cents at 5:09 p.m. in Wellington from 69.15 cents immediately before the release. The benchmark stock index extended its gain, rising 1.2 per cent to a record. Two-year interest rate swaps slid the most since 2011.

Traders are now bracing for a 25 basis-point rate cut by August, with the chance of a second by the end of the year, swaps data show.

Kiwibank now forecasts a quarter point cut in May, followed by another later in 2019 to take the cash rate to 1.25 per cent, senior economist Jeremy Couchman said in a note after the decision. Before today, only ANZ Bank expected lower rates this year, according to a Bloomberg survey.

A report last week showed New Zealand’s economy expanded just 0.9 per cent in the second half of 2018, adding to signs that inflation will stay below the midpoint of the bank’s 1-3 per cent target range. In February, the Reserve Bank projected a rate hike in the first quarter of 2021 and lowered its forecasts for inflation, saying it now expects prices to rise just 1.4 per cent this year.

“We will keep the OCR at an expansionary level for a considerable period to contribute to maximizing sustainable employment, and maintaining low and stable inflation,” Orr said in the eight-paragraph statement on Wednesday.

Orr said the Reserve Bank still expects low interest rates and government spending to support economic growth and that, as capacity pressures build, inflation is likely to pick up.

However “the balance of risks to this outlook has shifted to the downside,” he said. “The risk of a more pronounced global downturn has increased and low business sentiment continues to weigh on domestic spending.”

Focus now switches to the next decision on May 8 which will be accompanied by a revised set of economic forecasts and will be the first made by a new-look policy committee including external members.

The committee is an “additional spanner in the works” because it could take a different stance to Orr, said Dominick Stephens, chief New Zealand economist at Westpac Banking Corp. in Auckland. “Clearly the odds of an OCR reduction this year have increased.” 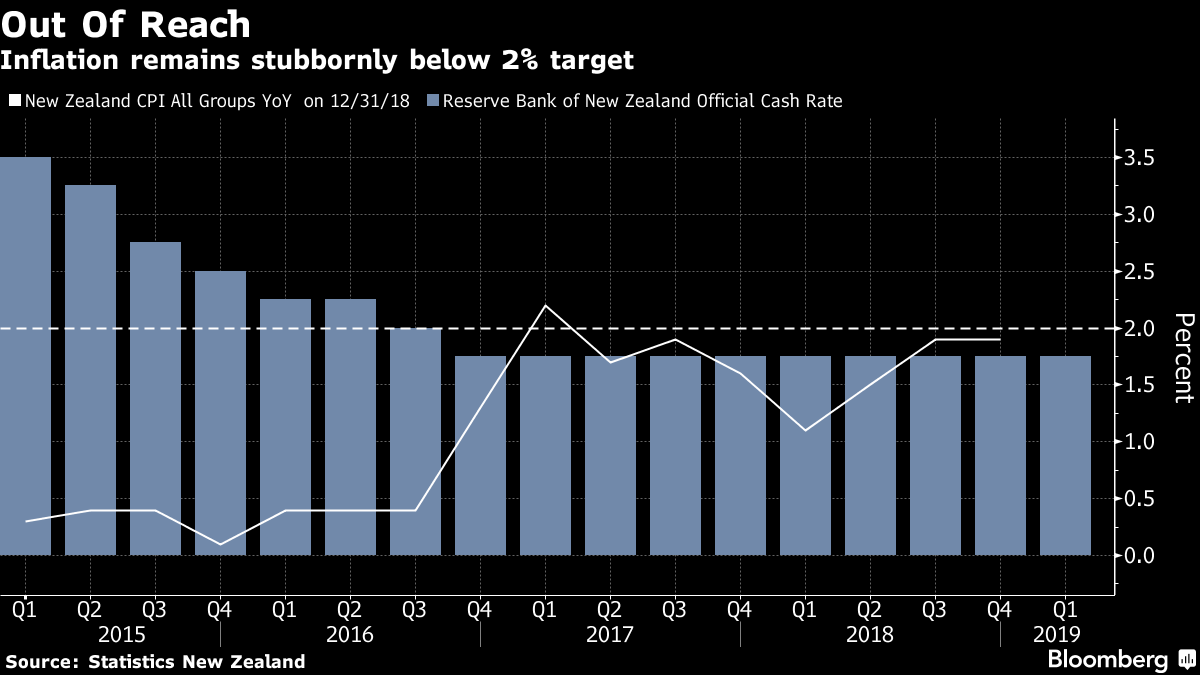