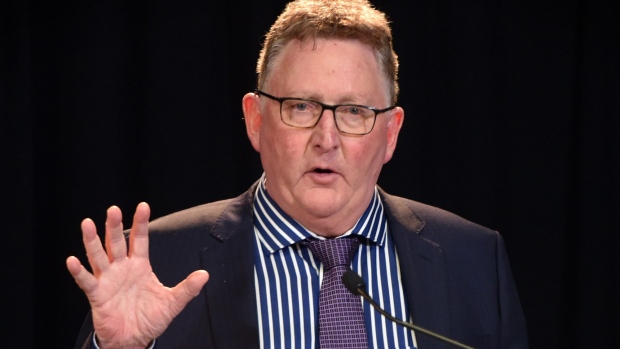 “We can all put our hands on our hearts across the committee and say we are officially contractionary with our monetary policy at this point,” Orr told a parliamentary committee Thursday in Wellington. “It’s been a long haul from extremely low interest rates through the shock period to something that we would consider now contractionary on spending behavior.”

The Reserve Bank on Wednesday raised the Official Cash Rate by 75 basis points to 4.25% -- the biggest increase since the OCR was introduced in 1999 -- and projected the benchmark will need to reach 5.5% next year to return inflation to its 1-3% target. The bank projects a more prolonged period of restrictive policy that will push the economy into a 12-month recession starting in the second quarter of 2023.

The RBNZ has raised the OCR by 400 basis points since it began tightening in October 2021 and has had to raise its estimate of the so-called neutral cash rate -- the level at which it no longer stimulates the economy. Yesterday’s Monetary Policy Statement showed the rate could be as high as 3.6% based on a model using short-term inflation expectations.

“We need to get actual and expected inflation down,” Orr said. “The committee agreed that we need to reach a higher level Official Cash Rate sooner than previously anticipated.”

“That starts to become a long period of heightened inflation that seeps into inflation expectations,” Orr said.

He said the Monetary Policy Committee is “sorry that New Zealanders are being buffeted by significant shocks and inflation is above target.”

But Orr also said that the four quarters of contraction will be “shallow” and may be “employment rich” given the persistent labor shortages in the economy and demand for workers.