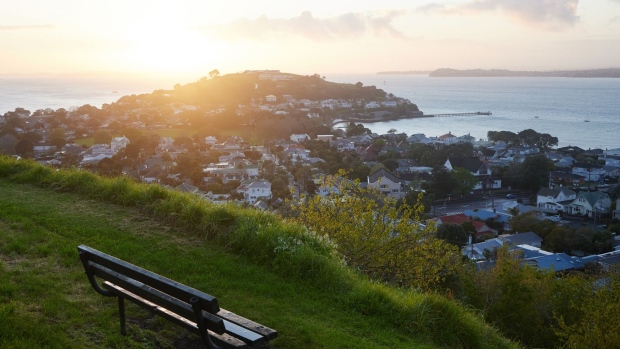 Buildings stand in Auckland, New Zealand, on Wednesday, Sept. 16, 2020. New Zealand’s economy will endure a shallower recession than previously expected but the coronavirus pandemic will have a longer impact on the country’s finances, according to government projections. , Bloomberg

The Reserve Bank would use loan-to-value ratios or new tools currently under consideration to restrict the amount of money banks can lend for house purchases, the RBNZ said in its semi-annual Financial Stability Report Wednesday in Wellington. The bank will be watching how the property market reacts to recent government policy changes, it said.

“If required, we are prepared to further tighten lending conditions for housing using LVR requirements or additional tools that we are assessing,” RBNZ Deputy Governor Geoff Bascand said in a statement. “A high proportion of new lending has had high debt-to-income and loan-to-value ratios. This makes recent borrowers more vulnerable to a rise in mortgage rates, and exposes households and the financial system to a decline in house prices.”

The government has announced a raft of new measures to dampen investor demand for housing after prices soared more than 20% in the past year. It has also told the RBNZ to pay more attention to the housing market when setting policy.

Finance Minister Grant Robertson asked the central bank to look at debt-to-income ratios for investors and limiting the use of interest-only mortgages. The RBNZ gave initial feedback today, with a more detailed response due later this month.

“In terms of new tools, our assessment is that a debt serviceability tool would be the best option for supporting financial stability and sustainable house prices over the medium term,” the RBNZ said. “Restrictions on interest-only lending would likely have less impact on overall lending conditions than alternatives, while being challenging to implement and enforce.”

Implementing either of these new tools “is complex and would take time to work through,” it added.

New Zealand house-price inflation accelerated to 18.4% in April, according to CoreLogic data published yesterday. Another measure published by the Real Estate Institute shows prices surged 24% in the year through March.

The RBNZ said while the government’s recent policy changes will dampen investor demand for housing over time, house price gains seem less sustainable than before.

“While the interest costs on mortgages are low and interest rates have generally fallen more than rental returns, interest rates could rise if the economy continues to strengthen and inflationary pressure builds,” it said.