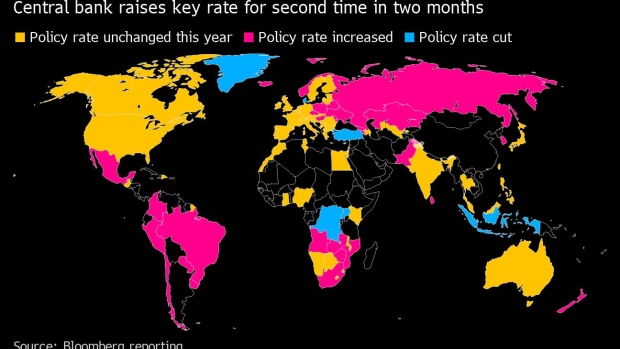 (Bloomberg) -- New Zealand’s central bank would consider risks to be slanted more in favor of faster monetary tightening had market interest rates not risen so much already, its chief economist said.

“If we were sitting here and still seeing very low interest rates, then you might say the risks are actually more on the upside,” Yuong Ha said in an interview Tuesday in Wellington. “But market pricing has moved a long way in a very short space of time.”

The Reserve Bank last week raised its official cash rate for the second time in two months, to 0.75%, and projected a tightening cycle that will take it to about 2.5% over the coming two years. The key downside risk to that outlook is how households respond to the spread of Covid-19 in New Zealand, while the main upside risk was faster inflation becoming embedded, the RBNZ said.

But Ha said the downside risks, including the emergence of the Omicron coronavirus variant, were unlikely to change the picture of rising price pressures.

“From where we sit, the outlook is demand might be a bit weaker, it might be a bit stronger depending on how households behave in this new world,” he said. “But it is still a world where inflation pressures are rising, capacity pressures are going to stick around for a while and hence you probably need to be removing monetary stimulus rather than maintaining it.”

Ha said the RBNZ is unlikely to use the NZ$53.5 billion ($36.6 billion) of government bonds it acquired during its quantitative easing program as a tool to tighten monetary conditions.

The bank is currently deciding how best to manage down its bond holdings. But if it were to sell any it would be required under its agreement with the government to sell them to the Treasury Department rather than in the secondary market, he said.

“That’s just for market functioning and coordination. You don’t want both the Treasury and the Reserve Bank trying to sell government bonds into a market,” he said. “Essentially it would be negated or canceled behind the scenes, and then Treasury would have to figure out would they reissue the bonds that we’ve retired or not.”

The RBNZ is actively thinking about its options, but whatever it decides it “would try to make it as unexciting as possible,” he said.

“We wouldn’t be going out there deliberately trying to engineer higher rates. Hypothetically it is an option, but no central bank around the world has done that,” Ha said. “We’re comfortable tightening monetary conditions through the OCR, we’ve got a lot more comfort on how that works, the calibration, the quantum.”