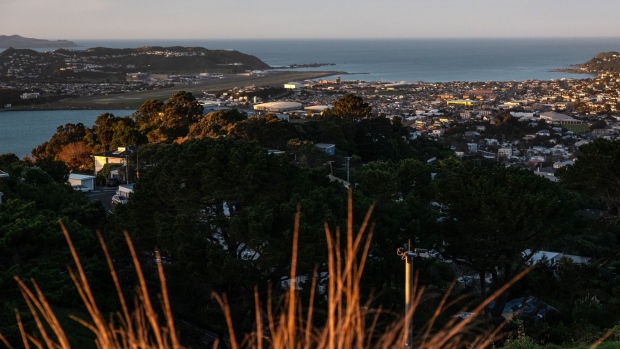 Residential and commercial buildings standing on the city skyline are seen from Mount Victoria Lookout at dawn in Wellington, New Zealand, on Saturday, June 22, 2019. The out-of-favor kiwi dollar has tumbled about 3% this quarter as the Reserve Bank of New Zealand turned dovish and cut interest rates, the first central bank in the developed world to do so. Economic growth held at a five-year low in the three-months through March, leaving the door open for further easing. Photographer: Birgit Krippner/Bloomberg , Bloomberg

(Bloomberg) -- New Zealand’s central bank is pushing back after the finance minister asked it to do more to rein in rampant house prices, saying the government should be looking at changes to tax policy.

“We will call on them to look at the full suite of whole-of-government instruments, and tax would be one,” Reserve Bank Governor Adrian Orr told Radio New Zealand on Thursday. “We will talk very openly about that.”

With house prices surging in response to record-low interest rates, Finance Minister Grant Robertson this week wrote to Orr asking him to consider taking housing into account when setting monetary policy. Orr has framed the letter as an invitation to advise the government on how to tackle housing affordability, and said the RBNZ will not change the way it conducts policy.

“It’s very clear in the letter that our objectives do not change, our operational independence is not impacted, and they want advice,” he said. “What is being suggested is that we have consideration for house prices, which we currently do.”

At a press conference yesterday, Orr defended the RBNZ’s monetary easing in response to the coronavirus pandemic, saying it has helped make the economy “one of the most resilient on planet Earth to date.”

That message was reinforced by RBNZ senior official Toby Fiennes in an interview with Bloomberg yesterday.

“Our estimates are that there are 16,000 more people in work than would have been the case if we hadn’t taken all those easing measures,” he said.

Fiennes also said the RBNZ’s next round of monetary stimulus -- a program offering cheap loans to banks from next month -- is expected to “depress interest rates right across the system” and therefore lead to further declines in mortgage rates.

Orr reiterated today that the central bank remains “completely focused” on its core mandates of inflation and employment, and turned the spotlight back on the government with regard to the housing market.

“There is a work plan I understand being put in place by the New Zealand Treasury,” he said. “They are the fiscal policy experts, they are the chief economic advisers to the minister of finance.”