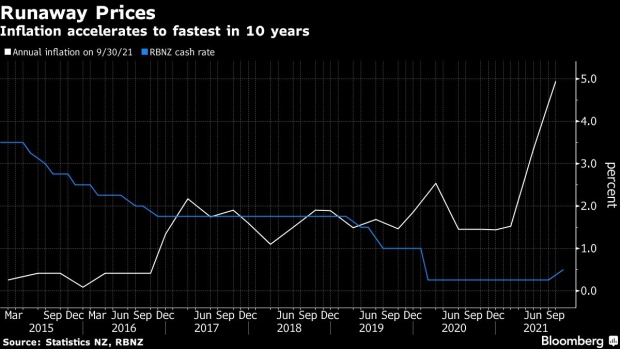 Adrian Orr, governor Reserve Bank of New Zealand, listens during a news conference in Wellington, New Zealand, on Tuesday, March 10, 2020. Orr said there is currently no need for unconventional monetary policy to be deployed. , Bloomberg

“Some of the price pressures we will see will lead to quite sustained, higher generalized prices,” Orr told a virtual press briefing Tuesday in Wellington after the Reserve Bank released a report on climate change. “We’re already seeing that in food prices globally and energy prices, transport, at present.”

Economists expect New Zealand inflation to approach an annual rate of 6% in coming months after it accelerated to 4.9% in the third quarter -- the fastest pace in 10 years. The RBNZ has already starting raising interest rates to tame price pressures and signaled more increases are coming.

The global transition to a carbon-neutral economy could cause economic disruption similar in scope to the period of subdued growth and rampant inflation during the energy crisis in the 1970s, according to a paper published by the Peterson Institute for International Economics in August.

“We will have to look through some very obvious price shocks but to the extent that they are persistent and truly changing the price of the basket of goods and services we consume, then there will be monetary policy reactions,” he said.

Orr noted the current price shocks caused by supply-chain disruptions during the pandemic have proved to be more persistent than many expected.

“We’ve all talked about them, we all knew they were coming, we all said they may be temporary,” he said. “Now the general discussion is wow, these are persistent. Imagine that continuing now for the next 20-plus years. That is the world that we will be living in.”