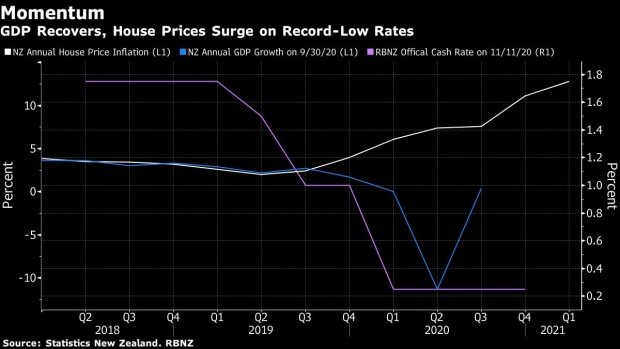 (Bloomberg) -- New Zealand’s central bank may try to dispel talk of monetary tightening at its first policy decision of the year.

The Reserve Bank will stress the need for ongoing monetary support when it leaves the official cash rate at 0.25% Wednesday in Wellington, economists said. It is likely to signal the OCR will be on hold well into 2022 and may refrain from publishing a forecast track that includes a rate hike, they said.

The economy has performed better than expected in a V-shaped recovery and the housing market is booming, removing any prospect of negative interest rates and turning attention to when the Reserve Bank might begin to remove stimulus. But the RBNZ will be mindful of the many risks ahead as the coronavirus pandemic continues to rage globally, and will not want to get ahead of other central banks for fear of pushing up the New Zealand dollar.

“Expect a message of not counting your chickens before they hatch,” said Nick Tuffley, chief economist at ASB Bank in Auckland. “The position New Zealand finds itself in at present looks to be ahead of even the dizziest of high expectations, but a lot can go wrong and the path of least regret for the RBNZ is to continue signaling -- as other central banks have -- that considerable monetary support will be needed for quite some time.”

When the Monetary Policy Committee convened last week for its first policy decision since November, New Zealand’s largest city had just gone into a snap lockdown. While it was lifted after just three days, it was a reminder of how uncertain the outlook is. New Zealand’s vaccination rollout to the general population is not expected to start until the second half of the year and the border may remain closed through 2021, crippling a tourism industry that was once the country’s biggest foreign exchange earner.

To to be sure, the RBNZ is closer to meeting its inflation and employment mandates than many of its peers. Unemployment unexpectedly fell to 4.9% in the fourth quarter and inflation is expected to accelerate to the 2% target by June. Prices for commodities such as wholemilk powder have risen on strong global demand, while construction is buoyant as people unable to take overseas holidays spend money on house renovations instead.

New Zealand’s sovereign credit rating was yesterday upgraded to AA+ by Standard and Poor’s Global Ratings, which cited the nation’s success in battling Covid-19 and its rapid economic rebound.

The RBNZ “simply must be less dovish” than it was in November because nearly every development since then has “portrayed a stronger, and more inflationary, economy than was expected,” said Stephen Toplis, head of research at Bank of New Zealand in Wellington. Still, “this does not mean the bank will be rushing to shift its current policy stance. And, for tactical reasons, it may even choose to produce a relatively neutral statement,” he said.

The RBNZ will revise up its growth, employment and inflation forecasts to reflect the brighter outlook, but the impact of the closed border on the tourism industry has yet to be fully felt, said Sharon Zollner, chief economist at ANZ Bank New Zealand in Auckland.

“The New Zealand economy is facing a large, negative income shock, and that will increasingly become evident over coming months,” Zollner said. “The RBNZ will be cautious about these headwinds, along with still-significant downside risks.”