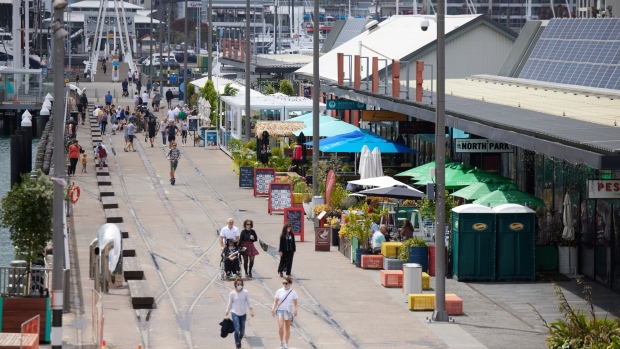 (Bloomberg) -- New Zealand’s central bank is wary that the labor market could get even tighter in the near term as workers take advantage of a reopened border to seek employment overseas.

“One risk we’re conscious of in the very short term is that even when the borders reopen, it actually becomes easier for Kiwis to leave the country than it does for foreigners to come in,” Reserve Bank Assistant Governor Christian Hawkesby said Tuesday during a KangaNews webinar. “So there is a potential for the labor market to get tighter before it gets looser.”

New Zealand’s jobless rate fell to 3.4% in the third quarter, matching its lowest on record, as the closed border cut the supply of foreign workers. That’s boosting inflation pressures as the labor shortage drives up wages. The RBNZ has raised the official cash rate twice and signaled further increases will be needed to contain inflation.

The government has announced plans to begin reopening the border next year.

Hawkesby said the forecast assumes that the restriction in labor supply abates. Still, that assumption “is not something we have a high degree of confidence around” and officials will continue to monitor employment trends, he said.

Hawkesby also told the conference that New Zealand continues to experience reduced productive capacity and strong demand, which has pushed core inflation to the top of the RBNZ’s 1-3% target range.