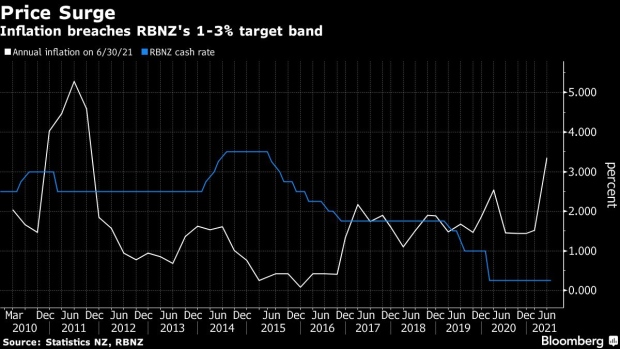 (Bloomberg) -- New Zealand’s central bank is expected to embark on a series of interest-rate increases to tame inflation and rein in soaring house prices, even as a coronavirus outbreak that has now spread beyond Auckland poses a greater risk to economic growth.

Reserve Bank policy makers will raise the official cash rate by a quarter percentage point to 0.5% Wednesday in Wellington, according to 20 of 21 economists in a Bloomberg survey. Most predict it will follow up with a succession of hikes over the coming year, taking the rate to around 1.5% by August 2022, though the persisting outbreak of the highly infectious delta strain of Covid-19 could interrupt the tightening cycle.

“We expect the RBNZ to go ahead with hiking the OCR on Wednesday, while noting downside risks to the outlook,” said Sharon Zollner, chief New Zealand economist at ANZ Bank in Auckland. “There’s no question that the situation is grimmer than we were all assuming back in August. We thought we were looking at a relatively short, successful lockdown and then we would be Covid-free, and that’s not likely at all any more.”

The RBNZ had its finger on the trigger of a rate increase in August but held off because New Zealand entered a nationwide lockdown on the day of the decision, posing a communication challenge. Most of the country has since exited lockdown but the outbreak continues to fester in largest city Auckland, prompting the government to extend restrictions there, and has spread to the neighboring Waikato district.

Tomorrow’s decision, due at 2 p.m. local time, is a rate review rather than a full Monetary Policy Statement, meaning the RBNZ will not publish new forecasts or hold a press conference. Traditionally, it prefers to change rates in conjunction with the quarterly MPS.

Investors are pricing an 80% chance that the RBNZ will raise the cash rate by 25 basis points, swaps data show.

There had been speculation that the RBNZ could deliver a 50-point rate increase after Assistant Governor Christian Hawkesby said such a move was “definitely on the table” and “actively considered” in August. However, a speech by Hawkesby two weeks ago indicated the bank was likely to take a more cautious approach given the risks to the outlook.

“The latest Covid developments should have flattened any remaining talk of the RBNZ raising the cash rate by 50 basis points,” said Stephen Toplis, head of research at Bank of New Zealand in Wellington, who expects to reduce his growth forecasts due to the ongoing outbreak.

“We still think the bank will raise the cash rate 25 basis points at this week’s review while signaling the likelihood of further increases to come,” he said, “but downgrade our probability of a rate increase to 85% from 100% in recognition of the issues being confronted.”

If it delivers a hike, the RBNZ will be in the vanguard of rate tightening in the wake of the pandemic, with only the Bank of Korea and Norway’s Norges Bank having acted already among developed peers. Still, central banks globally are starting to move toward exiting ultra-loose policy as economies reopen and supply disruptions stoke inflation.

New Zealand’s economy almost certainly contracted in the third quarter due to the three-week nationwide lockdown and ongoing restrictions on activity in Auckland. While most economists expect growth to bounce back quickly, as it did after the first national lockdown last year, there are mounting concerns the recovery could be more labored this time.

“After a steep decline in third-quarter GDP, we expect the government to shift away from its virus elimination strategy and accept living with it -- suggesting the recovery will be more subdued than previous post-lockdown rebounds as people maintain some degree of caution.”

Prior to the latest coronavirus outbreak, the economy was booming.

Gross domestic product surged 2.8% in the second quarter from the first, when it grew 1.4%. Inflation accelerated to 3.3%, breaching the RBNZ’s 1-3% target range for the first time in 10 years, and the unemployment rate dropped to 4%, matching its pre-pandemic low. House prices have surged 31% over the past year.