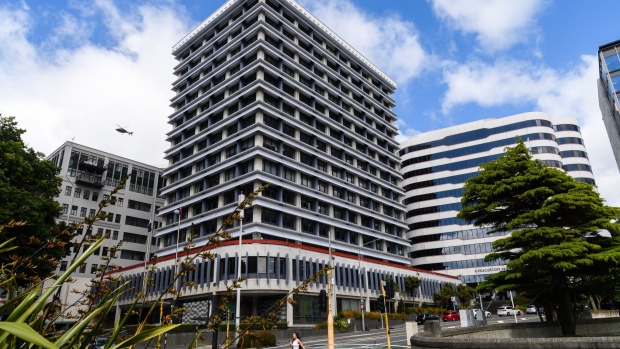 The Reserve Bank of New Zealand (RBNZ) building, center, in Wellington, New Zealand, on Saturday, Nov. 28, 2020. A housing frenzy at the bottom of the world is laying bare the perils of ultra-low interest rates. Photographer: Mark Coote/Bloomberg , Bloomberg

(Bloomberg) -- New Zealand’s central bank will increase interest rates by half a percentage point at each of its next three policy meetings to get on top of surging inflation, according to Westpac Banking Corp.

The Reserve Bank will take the official cash rate to 2% at its meeting on May 25 and follow with two more matching hikes in July and August, acting New Zealand chief economist Michael Gordon said in the lender’s quarterly economic overview released Tuesday in Wellington. Two further quarter-point increases will take the OCR to a peak 3.5% later this year, he said. Previously, Westpac expected a peak of 3%.

The RBNZ in February projected the OCR would peak at 3.35% in 2024, but since then inflation has accelerated more than expected to 6.9%. The RBNZ surprised economists with a half-point hike in April, and Governor Adrian Orr said policy makers are prepared to tighten aggressively to curb inflation expectations.

“We acknowledge that four in a row would be virtually unprecedented in the era of inflation targeting, but then so is much of what central banks are facing today,” said Gordon. “We think that the RBNZ’s focus over the coming months will be on making up lost ground.”

Last week, two-year ahead inflation expectations rose to a fresh 31-year high of 3.29% while five-year expectations reached 2.42%. The RBNZ is required to keep inflation in a 1-3% range.

“The RBNZ will not be pleased to see that longer-term expectations are moving above the 2% target midpoint,” said Gordon. “Expectations over long time horizons are less of a forecast and more of a poll on the central bank’s commitment to its inflation target.”

Earlier this month, Orr defended how policy was conducted during testimony to a parliamentary committee, saying the New Zealand was one of the first countries in the world to start raising rates and going it alone on monetary policy during a global shock takes enormous courage.

The Monetary Policy Committee is balancing the risk of stalling the economy against the threat of rising inflation expectations, Orr said in an International Monetary Fund Governor Talks interview in April.