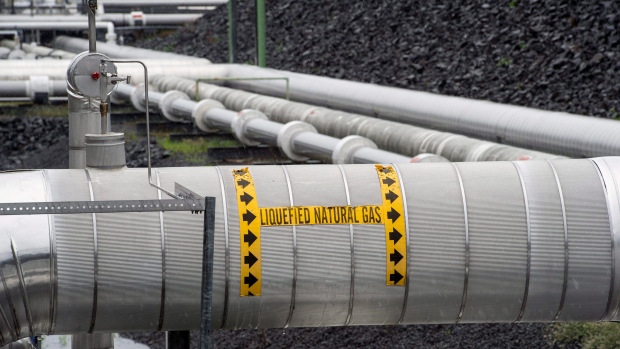 HOUSTON, B.C. -- The RCMP says it is enforcing a court injunction today requiring the removal of a blockade to a forest service road in northern British Columbia that is preventing access to a pipeline project.

In a statement, the Mounties say they are enforcing an interim injunction issued by the B.C. Supreme Court in mid-December that ordered anyone who interferes with the Coastal GasLink project in and around the Morice River Bridge to remove any obstructions.

Members of the Gidimt'en clan of the Wet'suwet'en First Nation have set up a camp and a checkpoint in the area, southwest of Houston.

The injunction gave protesters 72 hours to remove obstructions and the police say that has not happened, preventing Coastal Gaslink Pipeline Ltd. from being able to do any work in the area.

The pipeline by TransCanada subsidiary Coastal GasLink would carry natural gas from the Dawson Creek area to Kitimat.

The company says it has signed agreements with all First Nations along the route for LNG Canada's $40 billion liquefied natural gas project in Kitimat, but demonstrators argue Wet'suwet'en house chiefs, who are hereditary rather than elected, have not given consent.

A news release issued Sunday on behalf of Grand Chief Stewart Phillip of the Union of B.C. Indian Chiefs says all five Wet'suwet'en clans, including the Gidimt'en, oppose the construction of oil and gas pipelines in their territory.

"The provincial and federal governments must revoke the permits for this project until the standards of free, prior and informed consent are met," Phillip says in the release.

The RCMP says people in the Houston area would notice an increase in the number of police officers as a result of the action it is taking to enforce the injunction.

"We are very hopeful that there will not be violence or disorder as we enforce the court order; however, the safety of the public and our officers is paramount when policing demonstrations, particularly due to the remote area in which the bridge is located," it says.

The Mounties say exclusion areas and road closures were also planned in the area the Morice River Bridge.

"Those areas will be clearly marked and media/public are welcome to stand at the perimeter, but no one will be allowed to enter the exclusion zones," the statement says.

The RCMP says it is not taking sides in the dispute.

"The conflict between the oil and gas industries, Indigenous communities, and governments all across the province has been ongoing for a number of years. This has never been a police issue," it says in the statement. "In fact, the B.C. RCMP is impartial and we respect the rights of individuals to peaceful, lawful and safe protest."