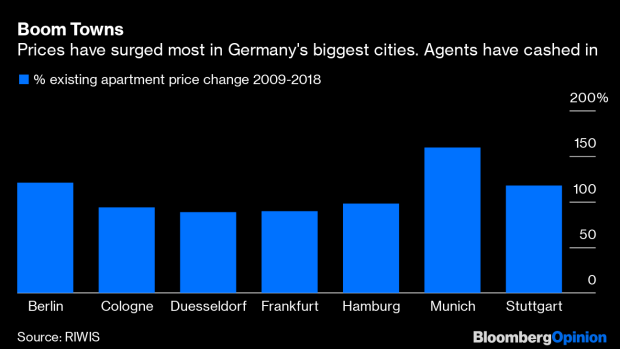 (Bloomberg Opinion) -- Real estate agents aren’t well liked anywhere, but Germany’s really take the biscuit. Here, home-buyers often pay the commission of an agent hired by the seller and this can be as high as 7% (6% plus sales tax) of the purchase price. Who pays and how much varies by federal state.

Add in notary costs and property transfer taxes and the one-off expense of buying a home in Germany can add up to 15% of the purchase price. Banks usually won’t finance these massive upfront costs and they harm the buyer’s ability to build up wealth for retirement. With house prices soaring, even fewer people have enough savings to get on the property ladder; only about half of households own their own home in Germany. That’s among the lowest level in Europe and makes inequality worse.

As a prospective home-owner I’ve long despised these exorbitant commissions. Happily, the federal government at last seems to agree. This week the cabinet approved a draft law that would require the buyer and seller to split the cost of an agent’s fees.

Property agents are still getting off lightly, though. Proposals to cap agent fees at 2% and shift 100% of the burden onto the seller were rejected. That’s not surprising because the real estate lobby is powerful. The government didn’t even force landlords to cover the costs of their rental agents until 2015. Before then, the obliging tenant had to pay.

Unfortunately, this week’s compromise helps shore up the property industry’s dubious contention that an agent hired by the owner will protect the interests of both the buyer and seller. Still, at least this legislation should subject pampered realtors to a bit more competition.

In Britain real estate commissions are paid by the seller and, thanks partly to online property listings, they’ve fallen to about 1.5%. Many European countries are similarly cheap. Americans, however, suffer the same fleecing as the Germans. Commissions in the U.S. often total 5% or 6% of the purchase price. Unlike in Germany, it’s still common for both the buyer and seller there to have a broker, pushing up the cost. No wonder the U.S. opened an antitrust probe of the industry.

Americans often haggle their broker commissions down but Germans have little power to do so; try and you’ll be passed over for someone more “cooperative.” Sellers don’t care what the agent charges as they’re not paying the bill. There’s a total lack of competition and value for money.

In fairness, real estate agents have to work hard to sell properties in depopulating rural parts of Germany. But booming cities like Berlin and Frankfurt are sellers’ markets and property agents barely need lift a finger to complete a transaction. Between 2015 and 2017, German residential property agents’ revenues shot up by more than one-quarter to 8.5 billion euros, according to the Federal Statistical Office, as they take the same percentage on hugely inflated house prices.

An industry that’s earning more but working less, while providing little benefit to the buyer, appears ripe for reform.

Of course, there’s an argument that legislation won’t improve thing: sellers will simply add their share of the fees to the purchase price. Similarly, if buyers don’t have to spend as much on commissions, they may bid up home prices even more.

The government expects the law to cut estate agent revenue because some sellers will opt to do without an intermediary, but it’s hard to shed a tear over that. This reform should weaken the notion that agents have a divine right to 5% or more.

As we’ve seem in the U.K., competition and technology quickly drive down these fees, as they’ve done in travel and finance too. The German and American property markets need to catch up.