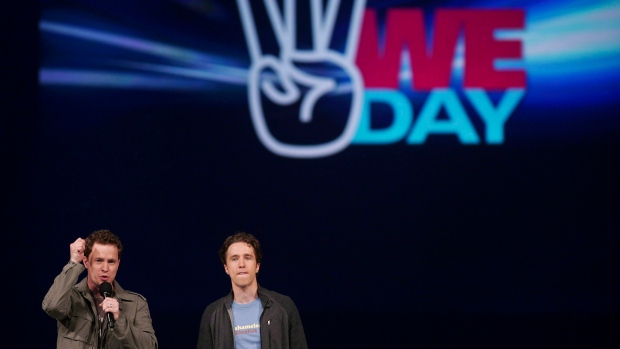 Virgin Atlantic Airways says it is suspending its sponsorship of WE Charity amid an ongoing controversy over a deal to run a student-volunteer program. Marc, left, and Craig Kielburger, co-founders of the charity Free the Children, speak at the charity's We Day celebrations in Kitchener, Ont., Thursday, Feb. 17, 2011. , The Canadian Press

TORONTO - As sponsors cut ties with WE Charity and it faces scrutiny from MPs, donors and the Canadian public, experts say the organization must tackle the question of how to move forward financially.

The organization, which stepped away from running a $900-million student volunteer program for the federal government amid concerns about how the contract was awarded, has spent the last few weeks laying off workers, cancelling their star-studded stadium events and launching a restructuring of the 25-year-old youth empowerment charity.

Appearing before a parliamentary committee earlier this week, WE co-founder Craig Kielburger said recent criticism is “killing” the organization, which is “being raked over the coals.”

A number of sponsors including Royal Bank of Canada, Loblaw Companies Ltd., Good Life Fitness and Virgin Atlantic Airways have ended their relationships with the charity in what WE called a mutual agreement. DHL and WestJet Airlines Ltd. have said they are considering following suit.

Caroline Riseboro, the president and chief executive of Trillium Health Partners Foundation, said charities going through a scandal should get in touch with their most loyal donors and be candid about what is going on.

She wouldn't comment on WE specifically, but recommends that any charity facing scrutiny and financial troubles admit when they are wrong and perhaps, do a governance review or consider some painful departures of top executives.

Some of those steps are already underway at the charity.

WE has announced it will reimburse the government for all funds it received for the volunteer program and waive costs it already incurred as it prepared to administer the program. It is also launching a formal organizational review and said it will hire a chief risk and compliance officer.

“By making these changes within our organization,” WE said in a statement, “we believe we can move forward to the next 25 years ... focused on what matters most: the communities and youth we serve.”

As it works to shore up relationships with its donors and partners, there's no doubt WE can survive on some of the assets it already has, said Mark Blumberg, a lawyer at Blumberg Segal LLP specializing in non-profit and charity law.

WE Charity's T3010 financial forms it filed to the federal government show it owns $43,724,082 in land and buildings outside Canada last year and had $6,288,180 in capital assets outside the country.

“They're sitting on $45 million (in real estate). They could probably last for another 200 years,” Blumberg said.

“They can cut their costs and they are already letting go of a lot of people.”

Real estate is a simple way to tackle money issues in troubled times, but not all charities have properties, said Blumberg, who is behind charitydata.ca, a tool offering transparency around the finances of registered Canadian charities.

His firm analyzed 84,181 T3010 financial filings registered charities made in 2017 and found their biggest income source was governments, which gave $184 billion to philanthropic organizations in 2017.

Most government money goes to universities and hospitals, he said. (Using a different metric, WE said less than one per cent of its operating budget comes from government.) That means other charities tend to focus on revenues streams like gifts-in-kind or donations, he said.

For WE, that may be easier said than done.

It's unclear whether sponsors that have cut ties with WE plan to return, and other donors may be hard to come by at the moment.

“If there's a huge cloud over a group or there's a lot of discussion about a group and some of it's not positive, the last thing you're going to be running to do is to give them money until that cloud has been dealt with and settled and there's more information,” Blumberg said.

Riseboro said if you're a charity who received a donation to cover real estate, you can try to go back to that donor and ask to reallocate restricted funds to keep you afloat.

However, reaching out to any sponsor or donor again will take some due diligence and extra effort, said Riseboro, who raised more than $2 billion in her 20 year career and was previously a chairwoman of the Association of Fundraising Professionals.

“You can go back to sponsors, but you've got to show that you've made the necessary changes at your organization,” she said.