With two trading days left until the end of the year, Canada’s benchmark stock index is on pace for its best run in a decade.

Here’s a look at some of the biggest winners and losers in Canada’s equity market this year.

Real Matters Inc., a provider of network services for the mortgage and insurance industries, is the biggest gainer so far this year with a 282% surge. The rally has pushed the Markham, Ontario-based company’s market value beyond the $1 billion (US$819 million) mark. Last month, National Bank Financial upgraded the stock to outperform and said it “did not give enough respect to the correlation of Real Matters business with the market volumes for mortgages.”

The rotation from value to growth this year has been good for tech stocks, making them the country’s best performing group by a mile. The S&P/TSX Info Tech Index has gained more than 65% this year, adding about $58 billion (US$45 billion) in value.

Shopify Inc., the subject of some takeover speculation, is up 183% so far in 2019, the top tech stock and the second-best overall performer on the broader index. Investors have rewarded the Ottawa-based company’s rapid sales growth and its plans to spend US$1 billion to set up a network of fulfillment centers in the U.S. In October, Shopify reported an unexpected quarterly loss which may have tempered sentiment. Co-founder and chief executive officer Tobi Lutke took to Twitter on Boxing Day to share his thoughts on his company’s success:

The tech gauge makes up about 6% of the TSX Index but only contains 10 stocks, leading tech-starved investors to turn to newly-listed Lightspeed POS Inc., which boasted Canada’s second-biggest IPO this year and the biggest offering by a Canadian tech firm in almost nine years. The stock has gained 93% this year, making it the second best tech stock on the TSX.

The investor frenzy that characterized the cannabis industry in 2018 quickly faded this year as companies missed earnings expectations and the regulatory landscape proved to be more difficult than expected. Canada’s healthcare index, primarily made up of marijuana companies, is the worst performer this year, and the only one in the red.

Aurora Cannabis Inc., the biggest loser on the TSX, has wiped out $4 billion in market value in 2019 as it tempered plans to achieve sustained earnings before interest, taxes, depreciation and amortization in the quarter ended June 30. The Edmonton, Alberta-based firm reported an adjusted Ebitda loss of $39.7 million for the quarter ended Sept. 30. 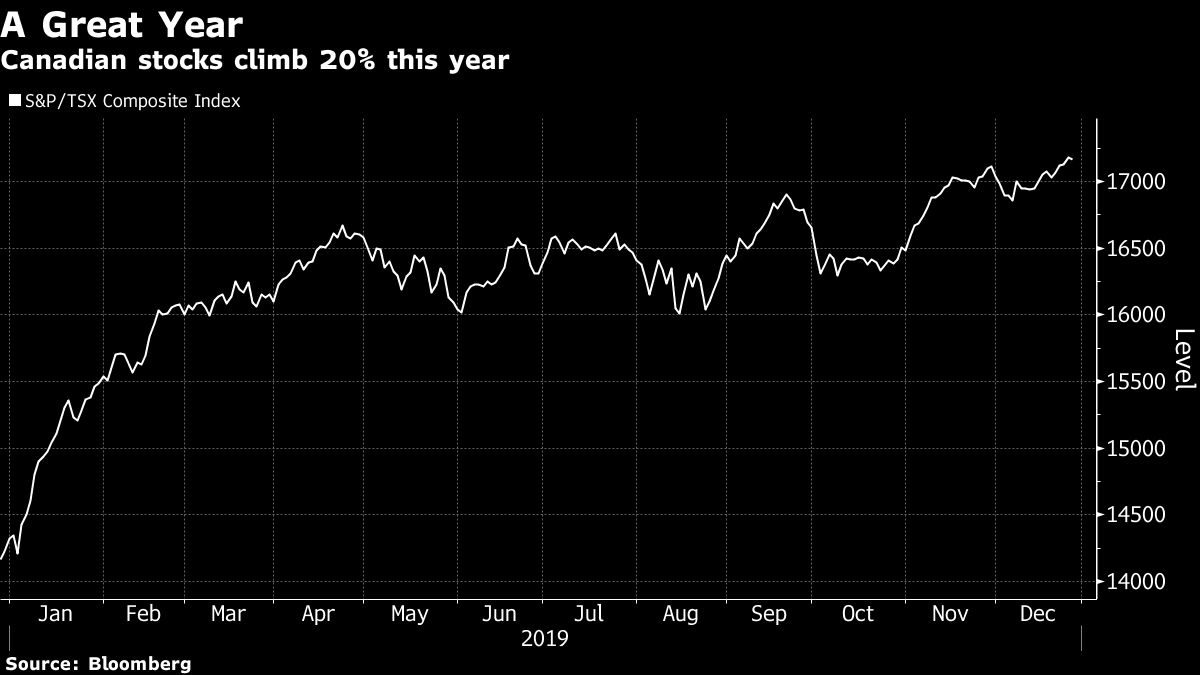 Gatineau, Quebec-based Hexo Corp. came in a close second, erasing about half its value this year. The company cut almost a quarter of its workforce weeks after saying it wouldn’t meet revenue guidance this year or next. Earlier this week, beleaguered Hexo announced a share shale at a “massive” discount that sent the stock tumbling yet again.

Pot exchange-traded funds in the U.S and Canada have suffered: ETFMG Alternative Harvest ETF has slumped 57% since its March peak and the Horizons Marijuana Life Sciences ETF has plunged more than 63%:

So what’s left? Here’s a look at some of the other main moves this year:

Canada’s economy contracted in October for the first time in eight months, missing economist estimates for a flat reading, as the United Auto Workers strike in the U.S. weighed on plant production.

Fewer Canadian small and mid-size firms intend to make capital expenditures in the next three months, according to a monthly industry survey by the Canadian Federation of Independent Business.

Next up, Markit Canada manufacturing PMI for December is due on Jan. 2.

After CBC cut out Donald Trump’s cameo in “Home Alone 2: Lost in New York,” the U.S. President took to Twitter, suggesting Prime Minister Justin Trudeau may have had something to do with it. CBC said on Friday the edits to the film were made in 2014, before Trump became president, to add for more commercial time.