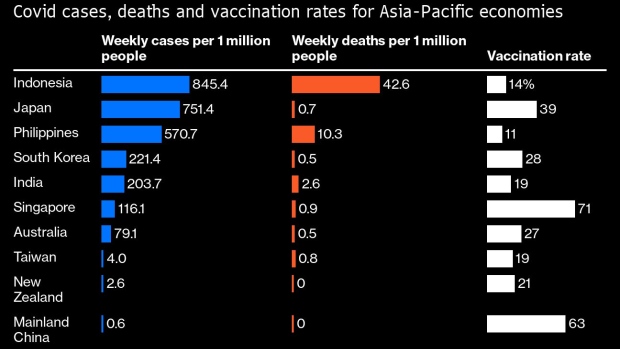 The drop-off area is deserted at Beijing Capital International Airport in Beijing, China, on Thursday, Aug. 5, 2021. China imposed new travel and movement restrictions amid a delta-driven outbreak that’s grown to over 500 symptomatic cases scattered across half the country, as the government stuck to its aggressive containment playbook rather than rely on the high vaccination level of 61%. , Bloomberg

(Bloomberg) -- Asia’s economies are already showing a hit from the surging delta variant of Covid-19 as consumers stay at home and airplanes idle on the tarmac.

Early warning signs are showing up in Google mobility data capturing the impact of government restrictions on movement. Flight capacity in China is pointing to a slump in travel, manufacturing in Southeast Asia is hurting and Australian business sentiment has tumbled.

That’s why Goldman Sachs Group Inc. economists are warning of a “negative delta in Asia” and have lowered their growth forecasts for China, along with JPMorgan Chase & Co and others. HSBC Holdings Plc warn that the electronics cycle has already peaked in Asia, meaning bumper technology exports may be cooling.

While the latest nowcast readings from Bloomberg Economics show the global economy is poised for acceleration this quarter, they also warn that the delta flare-up in China alone is affecting areas that account for more than a third of gross domestic product in the world’s No. 2 economy.

Asia’s outlook has deteriorated notably upon the delta variant outbreak. In China, the latest outbreak -- not the biggest since the national lockdown, but the most widespread -- looks set to have the most severe impact yet this year. The hit is most direct on consumption and contact intensive sectors, but it comes at a time when the downward pressures on the economy on production have started showing.

To gauge how the latest wave is playing out, we asked economists for a snapshot of which indicators in Asia they are watching.

Social-mobility restrictions will hit consumers the hardest and especially affect spending on services. Australia’s two-largest cities are in lockdown while China is imposing curbs in the middle of the summer break. Economists look to the Google data for a read on how retail and work is being impacted.

Large divergences in the region’s vaccination rates have left some populations vulnerable. Southeast Asia this month surpassed Latin America for the world’s worst death rate from Covid-19, according to Bloomberg calculations based on data compiled by Johns Hopkins University. The region also has one of the world’s slowest vaccine rollouts -- covering 14% of the population, only ahead of North Africa and Sub-Saharan Africa.

Singapore and China lead in vaccination rates, administering enough doses for more than 60% of their populations.

To sense the impact of China’s new restrictions on movement, consider this: the number of seats being offered by airline carriers dropped the most since early in the pandemic. Seat capacity plunged 32% in one week, based on data from aviation specialist OAG. China’s stumble sent global capacity on a weekly 6.5% slide as travel comebacks also stagnated in Europe and North America.

There are few better bellwethers for world trade than South Korean exports. Driven by the global technology boom, South Korea’s shipments of everything from semiconductors to rechargeable batteries have soared since the pandemic began. Still, even with chips still in high demand, economists at HSBC Holdings Plc say ‘peak electronics’ may be behind us.

Asian exporters have enjoyed a boom since the crisis began due to global demand for everything from work-from-home technology to health-care equipment. While that story is holding up for North Asia producers, manufacturers in Southeast Asia are seeing a slump in activity. Indonesia’s IHS Markit manufacturing purchasing managers index plunged to 40.1 in July from 53.5, its worst reading in 13 months.

Inflation has yet to emerge as a serious threat to Asia’s recovery, but there are early warning signs. China’s factory-gate inflation surged again to 9% in July as commodity prices climbed. That’s expected to cool over coming months but the worry is that higher producer prices in China may spill over to the rest of the region and globally.

The global growth story is holding up for now -- but the kind of virus flare-ups that Asia is experiencing could change that, according to Bloomberg Economics’s Senior Global Economist Bjorn van Roye.

“Despite the positive picture based on the existing data, uncertainty is still high and risks are to the downside,” van Roye wrote in a report. “A delta variant outbreak is already dragging down growth prospects for China, and could do the same across other countries.”