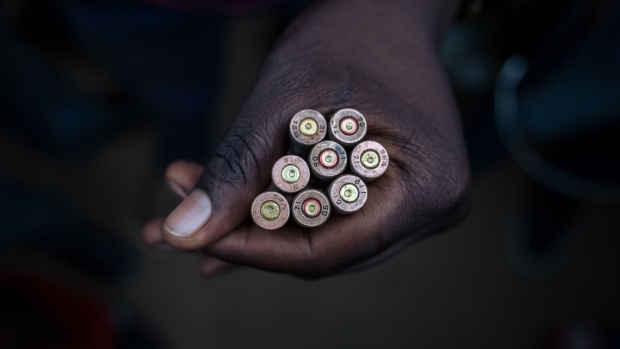 (Bloomberg) -- M23 rebels killed at least 131 civilians and raped more than 27 women and girls in the Democratic Republic of Congo last month, the UN said, detailing the scale of reprisal attacks by the militant group.

The attacks took place Nov. 29-30 in the villages of Kishishe and Bambo in the eastern Rutshuru territory amid clashes between the M23 and rival groups, the United Nations’ peacekeeping mission in Congo, known as Monusco, said in a statement Wednesday. Eight more civilians were wounded and 60 people were kidnapped, it said.

“The victims were arbitrarily executed by bullets or with bladed weapons,” according to the statement. The rebels may have buried some victims, in what may be an attempt to destroy evidence, Monusco said.

A spokesman for M23 called the UN report “fake” and denied the killings took place.

M23 and Congo’s army have been fighting since last year, with the rebels saying they’re protecting the rights of ethnic Congolese Tutsis and other Kinyarwanda speakers in the country. The government, UN experts and US officials have accused neighboring Rwanda of supporting the group, which Rwanda denies.

The Congolese army and UN peacekeepers defeated a previous M23 rebellion backed by Rwanda in 2013. The renewed fighting between the M23 and the army has increased tensions between the two nations.

Last week, Rwandan President Paul Kagame accused Congo’s President Felix Tshisekedi of using the conflict to try to postpone elections scheduled for next year. In response, Tshisekedi said Congo should support attempts by Rwandans to “liberate themselves” from Kagame and called his counterpart a “warmonger.”

“He’s proud of it,” Tshisekedi said in a speech on the weekend in the capital, Kinshasa. “It’s shameful. I’d even say it’s diabolical.”

Congo’s government has declined to negotiate with the M23 while it occupies parts of the country and the rebels aren’t participating in peace talks that are set to resume in Congo in January led by former Kenyan President Uhuru Kenyatta.

M23 on Dec. 3 denied preliminary reports of the massacres, saying that it counted only eight civilians killed by stray bullets in fighting with rebel groups.

Since then, the number of alleged victims has continued to grow, with Congo’s government saying Tuesday that M23 may have killed 272 people in Kishishe, which remains under rebel control.

Monusco has demanded access to the villages, and called the killings possible war crimes. Investigators spoke to 52 victims and witnesses at a peacekeeping base about 20 kilometers (13 miles) from Kishishe, Monusco said.

“Tell me how can you conduct an investigation of such an important situation when you are 20 kilometers away?” M23 political spokesman Lawrence Kanyuka said by phone Thursday. “People are faking information.”

Kanyuka said the rebels invited Monusco to come and investigate and promised them security. On Tuesday, the group said it was “ready to start disengagement and withdraw” from the region it occupies.

Eastern Congo has suffered decades of conflict since the 1990s, when violence from the aftermath of Rwanda’s civil war and genocide spread across the border. At least one of the groups that clashed with M23 last month has links to the perpetrators of the 1994 genocide, which left at least 800,000 Tutsis and moderate Hutus dead.

More than 390,000 people have been displaced since March due to fighting and are in need of humanitarian assistance, the World Food Programme said in an emailed report.

--With assistance from Saul Butera and Eric Ombok.