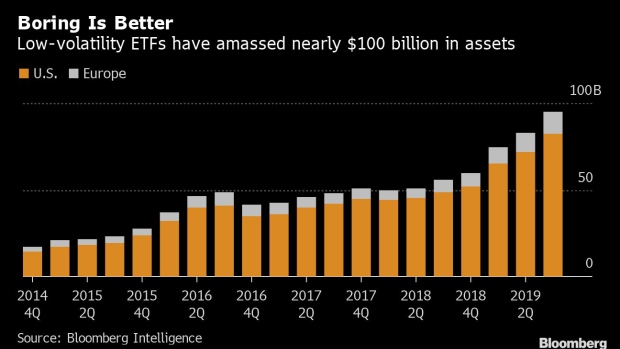 (Bloomberg) -- Wall Street banks have labeled them expensive, crowded and dangerous. Yet the boom in low-volatility stocks is intensifying.

Globally the investing style has now clawed back virtually all the losses it notched in the late-September rout for defensive quant trades. Calmer American shares have reached the priciest in 41 years compared with capricious counterparts, according to a Citigroup Inc. study into the low-beta factor.

Citi is among those firms warning that stocks offering muted price swings look too hot for comfort. Undeterred, traders are cramming into assets bearing defensive hallmarks to buffer everything from an economic downturn and trade tensions to White House dramas.

“Without a catalyst, we think the reversal for valuations will have to be the next upswing in the next business cycle,” said Alessio de Longis, a New York-based multi-asset fund manager at Invesco. Elevated premiums can continue until there’s a material shift in the economy that favors bullish bets, he said.

As global growth falters, his peers are also betting relentless demand for shares in sectors such as utilities and real estate -- which typically boast sturdy, bond-like companies -- will keep the strategy on an even keel.

Low-volatility exchange-traded funds in the U.S. look set to post their seventh straight week of inflows, while a Dow Jones index based on a low-beta strategy is poised for its fourth week of gains.

All that means the low-vol playbook is now the most exposed to macro risks like shocks in the dollar or oil markets since at least 1999, Citi analysts led by Hong Li wrote in a note this week. After ranking stocks by their sensitivity to broader market moves by the lowest quintile to the highest, the price-to-earnings premium for the investing style is at a four-decade high, they said.

Whether the steady cohort is becoming too popular for its own good is a point of debate within the industry. In an August paper, a team led by David Blitz at Robeco pointed to evidence of a continued structural bias for rockier shares among hedge funds and mutual funds -- part of the famous low-vol anomaly uncovered by quants.

Still if risk appetite improves, or bond proxies get lashed by higher yields, it could inflict pain on investors who have loaded up on tranquil equities.

“It’s a crowded trade and low volatility is not riskless,” said Tina Byles Williams, chief executive officer at FIS Group. “If you have a normal cyclical downturn, then a low volatility strategy is appropriate but low volatility tends to be high duration.”