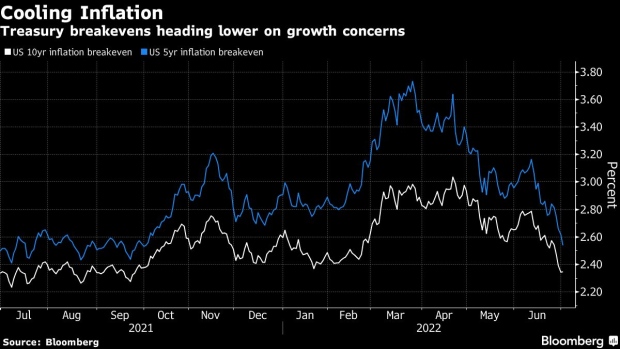 The Marriner S. Eccles Federal Reserve building at night in Washington, D.C., U.S., on Thursday, Sept. 30, 2021. President Biden is poised to avoid a disruptive shutdown of the federal government, but deal-making continues on his economic agenda before a planned Thursday vote on an infrastructure package that underscores deep divisions among Democrats. Photographer: Stefani Reynolds/Bloomberg , Bloomberg

(Bloomberg) -- Treasuries began the second half of the year on the front foot Friday as concerns continued to mount that Federal Reserve rate hikes will lead to a recession.

The three-year Treasury yield at one point tumbled as much as 17 basis points to 2.84%, while benchmark 10-year yields fell as much as 11 basis points to 2.91% after dropping below the key psychological mark of 3% less than a day before. Moves toward the short end led the way, steepening the curve as US stock futures indicated more pain for riskier assets. In Australia, the three-year yield tumbled as much as 21 basis points, just days before its central bank is expected to announce a half-point rate increase, while European yields also dived.

“The focus is shifting away from inflation and is now centered on growth as fears of a recession grow, hence markets are scaling back expectations for near-term and terminal rate hikes,” said Prashant Newnaha, a rates strategist for TD Securities. “Friday’s moves accelerated because of thin liquidity and key breaks in technical levels.”

The latest leg of the global bond-market rally came after Fed Chair Jerome Powell said Wednesday that the risk of harm to the economy from higher rates was less important than restoring price stability.

Traders continue to expect another 75-basis-point rate increase as the most likely outcome for the Fed’s next scheduled meeting in July, but bets on a peak have been pulled back to March 2023. The fed funds benchmark is now seen maxing out below 3.40% in the first quarter of 2023, based on swaps pricing.

The Institute for Supply Management’s manufacturing gauge due later on Friday is the last major US data release scheduled before the Independence Day long weekend and expectations are that it will show a softening from the prior month.

The prospects for a US recession were enhanced Thursday after figures showed personal spending for May rose 0.2%, half the expected increase. The price index for purchases rose 0.6% versus an expected 0.7%, supporting the view that an inflation peak is being established.

Market-implied inflation expectations have been falling steadily along with nominal yields over the past three weeks. Among them, the five-year forward estimate of the five-year expected inflation rate is back around 2.1%, where it stood in February before spiking to 2.6% in April. The Fed targets a 2% average inflation rate over time.

The late-June rally in Treasuries trimmed a year-to-date loss that eclipses even the biggest annual losses since the early 1970s.

A broad index measuring the performance of Treasuries has fallen over 9% in 2022. Since 1973, the bond market has only posted five annual declines, with the most recent being a drop of 2.3% last year.

“The market is digesting increasing odds of recession,” said Janet Rilling, senior portfolio manager at Allspring Global Investments. And it’s likely that “inflation will stay pretty elevated. So the Fed will continue to be aggressive.”