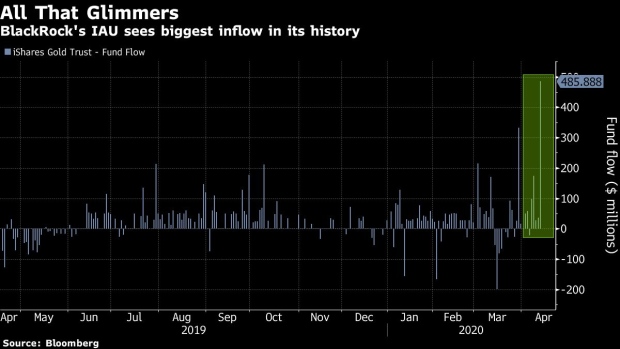 (Bloomberg) -- Investors are pouring money into exchange-traded funds tracking gold amid expectations of a global recession and massive stimulus from central banks and governments.

BlackRock’s iShares Gold Trust, ticker IAU, took in $486 million on Tuesday, its largest one-day inflow on record, according to data compiled by Bloomberg. At the same time, State Street’s SPDR Gold Shares, or GLD, has seen 10 straight days of inflows totaling about $2.9 billion. Gold ETFs overall have gained $2.5 billion in the past week alone.

“With the global amount of central bank money printing, there is a innate drive to acquire the oldest currency in the world -- gold,” said James Pillow, managing director at Moors & Cabot Inc. “For such a time as this, gold and stocks can rise. Although risk assets do not traditionally move in tandem with gold, they often do so when the central banks’ printing presses are humming.”

Although the S&P 500 closed at a one-month high on Tuesday, earnings reports and economic data are shedding light on just how drastically the coronavirus shutdowns are hurting the global economy. U.S. retail sales fell by the most on record in March, while the International Monetary Fund predicts that global gross domestic product will shrink 3% this year.

That’s forced central banks and governments around the world to open up the stimulus taps, sparking fears of currency debasement.

Even as stocks rally on the measures, investors are rushing into havens like gold, which traded near a seven-year high on Wednesday, extending its rally to 14% for the year.