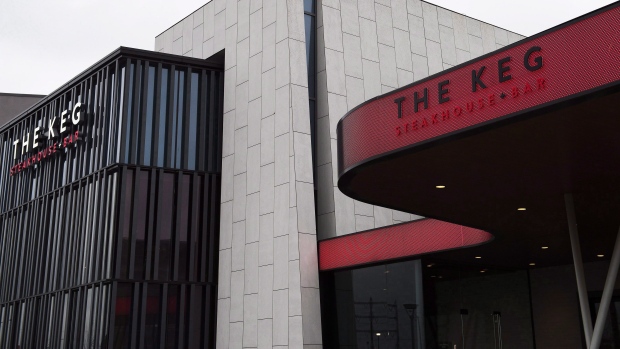 A photograph of The Keg Steakhouse and Bar is shown at Sherway Gardens mall in Toronto, January 23, 2018.

VAUGHAN, Ont. -- Shares of Recipe Unlimited Corp., the company behind Swiss Chalet, St. Hubert and the Keg, sank to a record low Tuesday after it reported "disappointing" results that saw its sales and profits slip in the third quarter.

"It is clear that the industry, in particular the full-service restaurant industry in Canada, is in a challenging environment," CEO Frank Hennessey told a conference call with financial analysts Tuesday after the company released its third-quarter results Monday evening.

The Vaughan, Ont.-based company saw total system sales fall by $10.7 million to $869.1 million for the third-quarter ended Sept. 29, from $879.8 million in the same quarter the previous year.

Same-restaurant sales, a key retail metric, fell 3.1 per cent in the quarter.

The company saw softening guest traffic in most areas where it operates  except Quebec -- and at most of its brands, Hennessey said. Recipe Unlimited owns 22 restaurant brands as of Sept. 29, including Harvey's, New York Fries and Milestones.

Hennessey noted several potential factors behind the slowdown, including a slowing economy, more restaurant seats in the market and a struggling retail sector.

Recipe's net earnings fell to $6.7 million for the quarter, compared with $23.8 million in the third quarter the previous year.

Still, Hennessey said he sees an opportunity for growth in the current market.

"In an environment such as we are currently in, standing still is not an option."

The company formerly known as Cara Operations is working to renovate its restaurants, particularly the Swiss Chalet brand.

Over the past quarter, it renovated 33 restaurants. The Swiss Chalet spots boasting new designs out perform their older counterparts, he said.

It is also expanding its salad bar concept to two Swiss Chalet locations -- Ontario's Barrie and Belleville -- by the end of the month, he said. The rotisserie-chicken chain's locations with the so-called Chalet Market see a lift in sales, he said.

The company also wants to become the delivery leader for the full-service restaurant industry and is working on an initiative to achieve better quality, speed and trust in its delivery service, said Hennessey.

The industry environment may spark further consolidation in the industry, said Hennessey, who did not close the door on acquiring more brands to add to Recipe's portfolio.

"We are not content with status quo, and while the results of this past quarter were indeed disappointing, we are excited for our future."