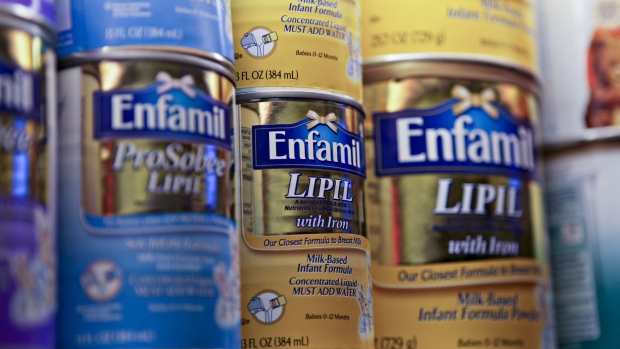 (Bloomberg) -- Leading Senate Democrats are urging the Justice Department to examine and potentially move to block the sale of the infant formula making arm of Reckitt Benckiser to a private equity firm.

“We encourage your division to give serious weight to the fragility of this particular market and the urgent need for strong, competing firms if Reckitt Benckiser and CDR move forward with a deal. If CDR’s history suggests that its acquisition of Enfamil would endanger the manufacturing arm’s ability to compete going forward or threaten the supply of infant formula during this period of crisis, your division should sue to block the deal immediately without considering any remedies,” the letter states.

A spokeswoman for Reckitt said that the company has been operating plants day and night and working in partnership with the government to boost manufacturing capacity to resolve the availability crisis. The company declined to comment on any potential sale of the infant formula business.

The lawmakers note that the infant formula market experienced severe shortages in May after Reckitt competitor Abbott’s main plant went offline due to contamination and such shortages could return if the proposed new owners of the Enfamil plants consolidate operations to drive profits higher.

The shortage has forced the Biden administration to acquire infant formula on the international market to increase supply. Congress in May enacted changes to government food programs to allow beneficiaries greater flexibility in buying different brands of infant formula.

The White House declined to comment on the letter from lawmakers and referred questions to the Justice Department, which did not immediately respond.