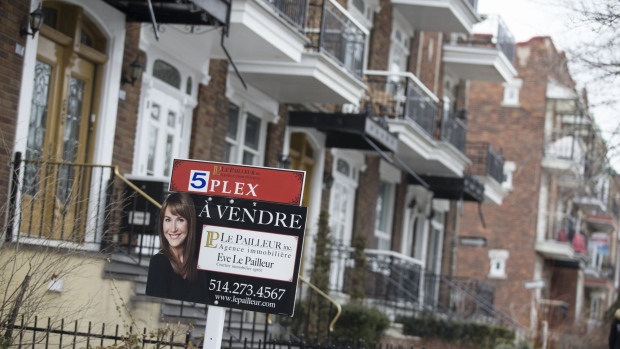 A "For Sale" sign is displayed outside a home in the Le Plateau Mont-Royal borough of Montreal, Quebec, Canada, on Saturday, April 14, 2018. An economic revival in Canada's second-biggest city is fueling a long-awaited real-estate renaissance, shrinking inventories, speeding up sales and luring foreign buyers. Photographer: Christinne Muschi/Bloomberg , Bloomberg

A six-bedroom remodeled mansion nestled against Montreal’s landmark Mount Royal park sold for $18 million (US$13.6 million), a record for a city that is increasingly appealing to foreign investors after years in the shadow of Vancouver and Toronto.

The 1924 house, which boasts a 14-car garage and an outdoor saltwater pool, was listed more than a year ago and sold in the midst of the coronavirus pandemic, filings show. Sitting on 0.62 acres (0.25 hectares) of private landscaped grounds, the property attracted interest from buyers seeking an “oasis in the city,” said Liza Kaufman, who handled the listing at Sotheby’s International Realty Quebec.

The sale, $2 million below the asking price of $20 million, strengthens Montreal’s status as a rising luxury destination with a buzzing real-estate market. Home sales in metropolitan Montreal jumped 46 per cent in July compared with the same month in 2019 following a two-month lockdown of the economy.

It is the most expensive residential transaction recorded through the listing system in the Canadian province of 8.5 million people, Kaufman said.

“We’ve been lagging behind Vancouver and Toronto for decades and I think it’s time that that we start catching up,” said Kaufman, who declined to share details on the seller and buyer. “I think this particular sale is going to signal that to consumers.”

With its food and cultural scene, bilingual Montreal offers a European flair in North America. For years, that wasn’t enough to attract investors spooked by Quebec’s political instability, according to Kaufman. That has changed in recent years as polls and election results have shown the secessionist movement no longer has traction in the province.

Despite a 13 per cent price increase so far this year, the city is still inexpensive compared with two of Canada’s other major cities. Family homes sold for a median $423,000 in July in the Montreal Metropolitan area, according to the Quebec Professional Association of Real Estate Brokers. That’s a far cry from Toronto’s benchmark $1.15 million for a detached home and Vancouver’s $1.48 million.

The number of properties in Montreal that sold for more than $1 million jumped 139 per cent for houses and 44 per cent for condos last month. Condos atop the recently built Four Seasons hotel in downtown Montreal are being priced between $6 million and $15 million, a record, according to Engel & Volkers, which is handling the sale.

Sotheby’s said it couldn’t publicly disclose the mansion’s final price, which Bloomberg saw in a filing, because of provincial regulations.

Kaufman said she sold the house nine years ago to the seller, who remodeled it and added an elevator to every floor. To build the garage, the owners redid the backyard and labeled every tree to abide by rules of Mount Royal, she said. The park, referred to by locals as “the mountain,” is a popular outdoors destination.