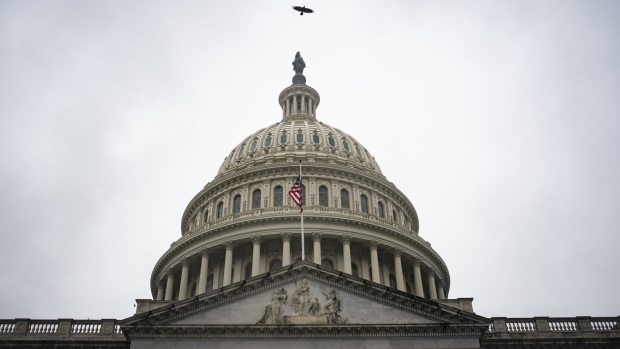 A bird flies over the U.S. Capitol on March 23. Photographer: Al Drago/Bloomberg , Bloomberg

(Bloomberg) -- The record U.S. economic stimulus package provides much-needed aid to small companies and Americans hit hard by the coronavirus, but it falls short of a fiscal elixir that heals the economy and offsets labor-market carnage.

Shortly after midnight Wednesday, the White House and Democratic lawmakers said they reached agreement on a $2 trillion bill aimed at limiting the economic hit of the outbreak. The Senate may vote later in the day; it would still need to clear the House and be signed by President Donald Trump.

Even with a price tag that represents about 10% of the nation’s total output, not all Americans who may need direct payments will receive them, and timing remains an issue. The draft text of the legislation had not been released as of 10:30 a.m. in Washington.

The bill -- the third phase of coronavirus aid from Congress -- was tweaked after House Democrats proposed their own $2.5 trillion version. The S&P 500 fluctuated in the morning session, following Tuesday’s 9.4% surge in anticipation of the deal between the White House and Congress.

Federal Reserve Bank of St. Louis President James Bullard said Wednesday on CNBC that the package is “about right for the situation” but said it was temporary relief: “This is not stimulus.”

Further stimulus will be needed in coming days and weeks to further bolster the economy and leaders should begin working on that now, according to Jason Furman, a member of Barack Obama’s economic team during the 2008 recession.

“I’ve never seen Congress move so fast to do something so large. Unfortunately, the problem may be larger and faster,” Furman said.

Here are economists’ views of the primary pieces of the latest bill:

For individuals, the package provides direct payments to lower- and middle-income Americans of $1,200 for each adult, as well as $500 for each child. House Democrats had been pushing for bigger payments.

The one-time payment simply isn’t enough depending on the duration of a lockdown and slower business, according to Bloomberg Economics’s Andrew Husby. Other analysts, including Claudia Sahm, a former economist at the Fed, say it’ll be necessary to send multiple rebates over the course of many months of the downturn.

The payment amount doesn’t apply to those making more than $75,000, just above the nation’s median household income. That could prove limiting as many technical, manufacturing and technology positions are cut and those workers find a smaller safety net.

Speed remains a key question, as millions of workers have lost jobs in recent weeks and require those checks to pay rent, make mortgage payments at the beginning of April and satisfy ongoing credit-card, auto, student-debt payments, as well as afford other daily costs.

Trump indicated the checks would go out by April 6, according to Senate Democratic leader Charles Schumer, but during the prior recession, it took about two months for those to go out.

Under the agreed language, unemployment insurance would be extended by four months, the benefits would be bolstered by $600 weekly and eligibility would be expanded to cover more workers.

That would help address a surge in joblessness unprecedented since the Great Depression. Unemployment-insurance claims are projected to skyrocket to 1.5 million for the week ended March 21, after not long ago touching a half-century low, according to a survey of economists by Bloomberg. Forecasts are as high as 4 million.

But this income usually accounts for 50% or less of an employee’s regular pay, so it doesn’t offset the income loss, Bloomberg Economics’s Husby says. Also, many state websites administering claims have been slow amid overwhelming traffic, so some Americans may be waiting longer than normal to receive funds.

Corporations and state and local governments get about $500 billion in assistance. Large firms -- those with 500 or more employees -- account for roughly half the private U.S. workforce, according to the ADP Research Institute. States disperse much of the healthcare spending. This component was one of the more contentious in discussions between Democrats and Republicans.

About a quarter of private U.S. jobs are in firms with fewer than 50 employees with a similar share at midsize firms, according to ADP. They’ve been among the hardest hit so far with retail and restaurant closures so any support for them is key to holding up the broader economy.

Top executives at Jefferies Financial Group Inc. suggested that the government should guarantee loans for companies so they can retain and pay their workers throughout business disruptions. The bill includes more than $350 billion in loans to small business.

Amherst Pierpont Securities economist Stephen Stanley, who broadly saw small firms as well-covered in the bill, said in a note to clients Tuesday that “there are a lot of difficulties in vetting applicants, but getting money out the door quickly will be vital to keeping small businesses alive and hence keeping workers employed.”