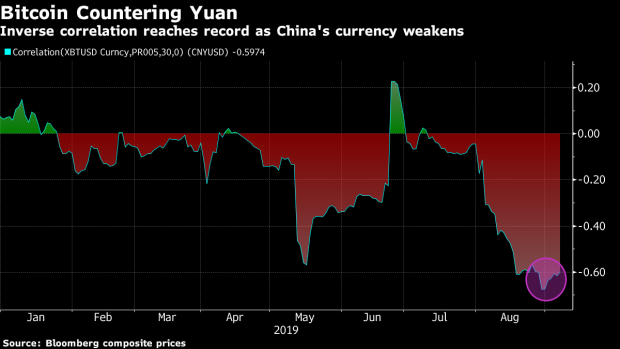 (Bloomberg) -- Bitcoin is increasingly moving in an opposite direction to China’s currency -- suggesting it may have become a refuge for people hedging the yuan’s depreciation.

The biggest digital coin reached a record inverse relationship in the past week, according to a Bloomberg analysis of their 30-day correlation.

“There’s corroborating evidence for this, in that people in Asia were paying more for Bitcoin than elsewhere when the yuan fell,” said Dr. Garrick Hileman, a researcher at the London School of Economics and Blockchain.com’s research director. “You can see it in the premium price paid sometimes for Bitcoin in exchanges like Huobi that primarily cater to Chinese.”

Speculation on the China effect has centered on factors that are weakening the yuan, from the trade war to the slowing economy. It also has included a court ruling in July stating Bitcoin is an virtual asset protected by Chinese laws, the first time any local court has reached such a decision, according to state media reports.

The inverse correlation “became more evident also in April and May, and as the tensions ratcheted up with the deterioration on U.S.-China trade relations,” Hileman said.

For years, the question of what moves Bitcoin’s price day to day has eluded enthusiasts, investors and Wall Street financial engineers who have begun creating futures and trusts on the world’s best-known private money to make it easier to trade. Its anonymous ownership and unregulated nature have kept its big movers and shakers largely in the shadows.The size of the inverse movement is of the order of gold versus Brent crude-oil futures, where the precious metal tends to climb when the most-traded commodity is sinking.

--With assistance from Zheping Huang and Eric Lam.

To contact the reporter on this story: Todd White in Madrid at twhite2@bloomberg.net

To contact the editors responsible for this story: Samuel Potter at spotter33@bloomberg.net, Robert Brand, Ravil Shirodkar