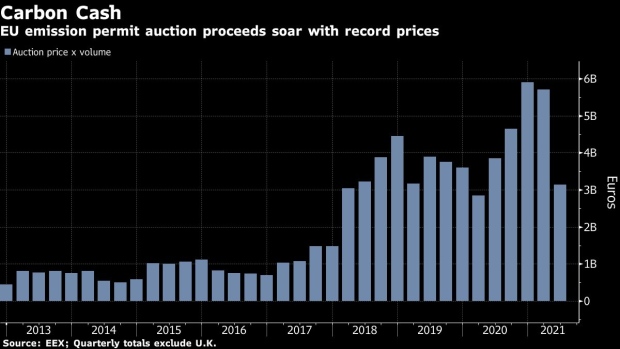 An electricity transmission pylon near vapor rising from the Belchatow coal powered power plant, operated by PGE SA, in Belchatow, Poland, on Wednesday, April 28, 2021. Poland’s plan to carve out coal-fired power plants, which would free up state-owned companies to invest in clean energy, sparked a rally in the country’s biggest utilities. , Bloomberg

(Bloomberg) -- An unprecedented rally in the European Union’s carbon market is helping fill national coffers with cash, muffling concerns about the impact of soaring pollution prices on the competitiveness of the bloc’s industry.

While heavy industry has voiced concerns about the pace of carbon price increases, government reaction has been muted. It’s a tough balancing act for national leaders, who must weigh the rising income from emission permit auctions against the risk of companies relocating their production to regions with more lenient pollution rules.

The increase of carbon prices to record levels presents a set of problems for the steel sector, according to the European steel industry association Eurofer.

“One is our global competitors do not have those carbon constraints,” said Eurofer spokesman Charles de Lusignan. “The second is it makes it more difficult to invest in the new technologies that will be needed to make the low carbon transition possible.”

Companies in the EU Emissions Trading System, the world’s biggest cap-and-trade program to reduce greenhouse gases, buy most of the permits to pollute at government auctions. With carbon prices surging to an all-time high of 50 euros per ton on Tuesday, revenues are also set to soar.

In 2020 alone, carbon permit auction proceeds jumped to almost 21 billion euros compared with 3 billion euros in 2013. This year, even though the start of permit sales was delayed, the first quarter already brought in 5.7 billion euros.

Under the EU law, at least half of the carbon revenue should be used for climate- or energy-related purposes, smoothing the transition to the bloc’s stricter emissions reduction target.

Cutting pollution from manufacturing will be one of the biggest challenges for the EU in the next decade. While traders see high prices accelerating the transition to greener energy, industry executives are concerned that it will boost the cost of compliance in the EU’s ETS and limit spending on clean technologies.

To ensure a level playing field for its companies, the EU is planning to introduce a carbon price on imports of certain emissions-intensive goods. Yet such a tool, known as carbon border adjustment mechanism, would start in 2023 at the earliest.

National leaders are next going to discuss implementation of the EU Green Deal and the stricter 2030 emissions-reduction target at an extraordinary summit on May 23.