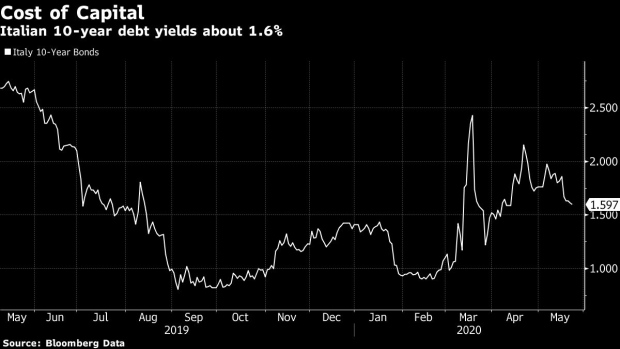 Pedestrian cross a road in view of Castel Sant'Angelo in Rome on May 19. Photographer: Alessia Pierdomenico/Bloomberg , Bloomberg

(Bloomberg) -- Italy’s record bond sale this week has cast a light on the price tag of the country’s political tension with the European Union and the EU’s emergency credit line.

The government’s decision on financing its pandemic costs will saddle taxpayers with 1.6 billion euros ($1.8 billion) of interest expense over the five-year life of the security. That’s 1.5 billion euros more than if Rome had borrowed using an emergency credit line through the European Union.

But the EU’s bailout fund, the European Stability Mechanism, has become toxic in Italian politics as nationalist parties use it as a cudgel to portray institutions in Brussels as attempting to undercut national sovereignty.

Instead, Italy sold 22.3 billion euros of five-year “Covid-19 emergency” notes with a 1.4% coupon Thursday. That means the government will be on the hook for as much as 312 million euros of interest each year.

The bonds are linked to inflation, meaning the interest cost could change over time.

The ESM facility, which became operational last week, allows Italy to borrow as much as 36 billion euros while only paying about 0.1% interest. So for the same amount of money, Rome would only have to pay 22.3 million euros in yearly interest, or 111 million euros over the life of the bond. Furthermore, the ESM would have lent the money to Italy at that rate for 10 years.

Populist parties in Italy have portrayed the ESM as a sellout to Europe, telling voters the country would lose control of its finances and future if it were to accept help from the fund. Finance Minister Roberto Gualtieri insists that these specific ESM funds would have almost no financial conditions, though they would have to be used for health-related purposes.

Prime Minister Giuseppe Conte sought to escape the bind on Friday by saying Italy wouldn’t use the ESM, citing EU plans for a separate recovery fund that would be able to disburse grants rather than loans.