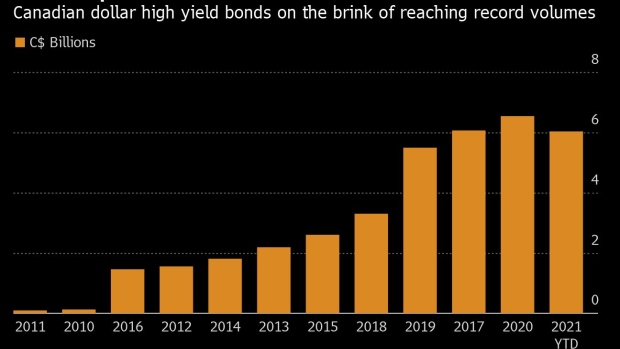 (Bloomberg) -- Videotron Ltd. almost doubled the size of its high-yield bond sale in Canadian dollars, bringing volume for the debt in range of an annual record with almost seven months to go.

Sales of junk-rated corporate bonds in loonies have reached just over C$6 billion ($4.95 billion) so far this year compared to a record C$6.5 billion sold in all of 2020, according to data compiled by Bloomberg. The unit of telecom operator Quebecor Inc. boosted its bond sale to C$750 million from the C$400 million initially planned, while keeping a U.S. dollar tranche unchanged at $500 million.

Sales of junk bonds, still a relatively small corner of the Canadian dollar corporate bond market, are expanding as investors looking to meet yield targets move down the credit spectrum. Premiums are close to the lowest on record, according to Bloomberg Barclays indexes.

For companies, that makes it very appealing to pay down bank facilities. Videotron and fuel distributor Parkland Corp., which also sold debt this week, plan to do so following their latest issuances.

“The Canadian market has evolved significantly since we started issuing in Canadian dollar high yield, growing much deeper and is now a reliable and important source of funding for us,” said Hugues Simard, chief financial officer at Quebecor. “Demand was strong in both markets, just a slight preference for Canadian dollars at this time,” he said in an emailed reply to questions.

The company got orders around three times more than the size of its loonie offering from 61 buyers, he said. The portion sold in U.S. dollar market, the world’s largest for such debt, was four times subscribed by 100 investors. On Wednesday, Parkland sold C$600 million of five-year bonds in a transaction that was subscribed around three times from 79 buyers, according to a person familiar with the matter.

For context, in the investment-grade market this week, Royal Bank of Canada’s C$2 billion of junior securities got around 70 buyers, racking up orders over twice the deal’s size, according to people familiar with the matter. Videotron and Parkland are both on the high end of speculative credit ratings, so some buyers may be betting on a rating action that puts them closer to the investment-grade indexes.

“As to investment grade, we believe that we are, for all intents and purposes, IG and will continue to work with rating agencies to achieve it,” Simard said. Videotron bonds are rated BB+ by S&P Global Ratings, one step under high grade. Parkland’s bonds, which are rated one level lower at BB, may garner an investment-grade rating in the next five years, Chief Financial Officer Marcel Teunissen said in an interview in March.

“Companies are taking advantage of low rates to term out maturities over the next few years, pay down credit facilities, etc,” said Dhruv Mallick, head of high-yield fixed income at Leith Wheeler Investment Counsel Ltd. On the other hand, buyers are taking advantage of new issue concessions, which recently have been around 10 basis points, and liquidity to access names they like, he said.