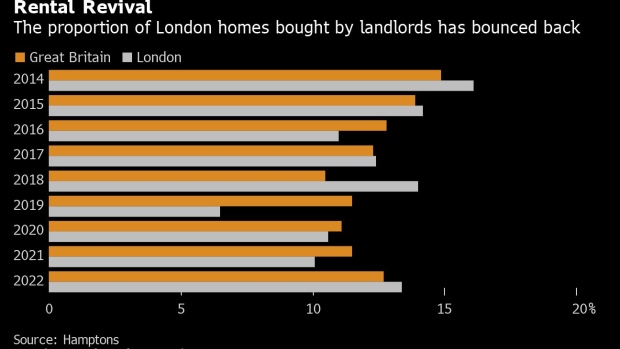 Estate agent "To Let" and "Rent" signs outside a residential properties in the Queen's Park district of London, UK, on Thursday, June 30, 2022. UK house prices slowed more than expected this month after a series of interest-rate increases raised the cost of mortgages. Photographer: Hollie Adams/Bloomberg , Bloomberg

(Bloomberg) -- The proportion of London homes bought by landlords has risen to a four-year high as record rent hikes lure more investors.

About 13.4% of housing transactions in the UK capital were by rental investors in the year through September, up from 10.1% a year earlier and the highest since 2018, according to data compiled by broker Hamptons. The jump reverses a recent trend that’s seen mom and pop rental investors selling up after a series of tax changes made it less attractive.

“Record breaking rental growth alongside weaker house price growth has boosted yields in the capital, particularly for flats in central zones,” Hamptons head of research Aneisha Beveridge said. “International investors, in particular, have benefited from a weaker pound, with many turning to London property once again as a way to protect their money from global inflationary pressures.”

Former chancellor George Osborne introduced fiscal changes designed to tilt the market away from typically older rental investors in favor of younger people buying their first home. These included phasing out tax relief on mortgage interest, and a 3% property tax surcharge on landlords and second-home buyers.

That saw the proportion of London homes bought by landlords collapse from more than 16% before the measures were introduced to a low of just 6.5% in 2019. The changes weighed heavily on London landlords due to the city’s high prices which meant more investors had to borrow to fund their purchases.

Changes in the cost of borrowing mean the trend is likely to spread outside of London, according to Beveridge. Rising interest rates make cheaper properties more attractive as they offer better returns, meaning landlords may now look outside of of the capital for deals.