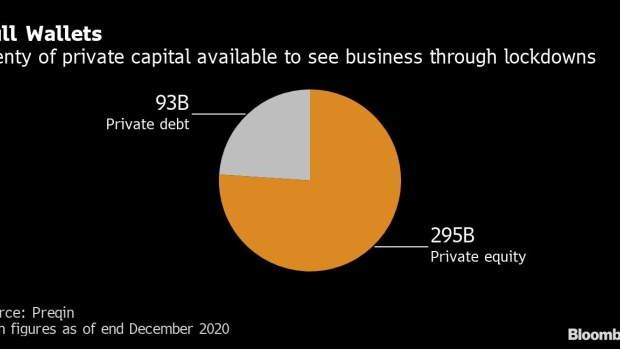 “If a business has a shortfall purely due to Covid-19, there is plenty of capital to support them,” said Nicholas Brooks, ICG’s head of economic and investment research in a telephone interview.

European private debt managers had almost $93 billion of capital available as of December 2020, with over $295 billion in the hands of private equity, according to data provider Preqin.

That cash could help out a lot of companies bearing the brunt of the pandemic that have already tapped out government-backed emergency loans. It’s a relatively expensive option, but may be the only one open to some of the hardest hit sectors as parts of Europe enter their third lockdown.

That means yet more pain for many of the firms identified by ICG in their analysis of financial data for around 500 private companies. Hardest hit were automotive and components, travel, hotels, restaurants and leisure, and retail, which endured months of almost zero revenues last year.

“Private debt and private equity have record levels of dry powder,” Brooks added. “Funds aren’t the issue, it’s really whether a business is viewed as viable in the long-run.”

It’s also a question of whether borrowers can afford the money on offer.

Direct lending, the sub-set of private credit that competes most directly with traditional loan capital markets, returned roughly 1% a year more over the last five years to investors than the European syndicated loan market, according to data from Preqin and the S&P European Leveraged Loan Index. Borrowers pay the difference.

For some, the price will be worth it.

With businesses turning to debt providers to keep them afloat, the rise in European private company leverage tracked by ICG comes as no surprise. The report shows leverage rose to 5.5 times earnings at the end of June 2020, up from 5.3 in 2019.

The gulf in pandemic outcomes between industries is stark with technology and healthcare riding high. The gap between hard-hit businesses that can access capital and those that can’t will be even more so. Collapse beckons for those left without support.

In May, the direct lending arm of Alcentra Ltd “decided not to provide further capital” to German car rental services firm Arwe, which owed it 65 million-euros. Insolvency followed.

“In the vulnerable industries, there’s going to be large-scale consolidation,” Brooks said. “People will return to taking flights and going to restaurants. Those businesses that have support will survive.”