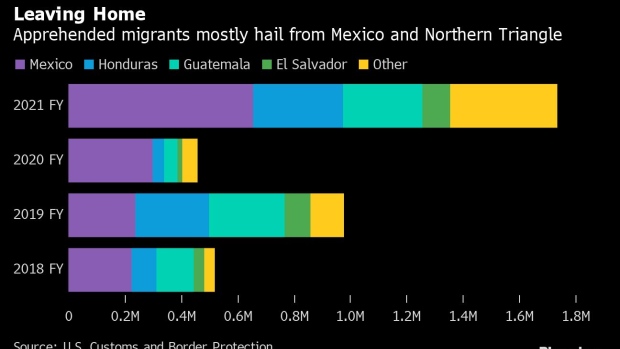 Migrants cross the Rio Grande River near the Del Rio-Acuna Port of Entry in Acuna, Coahuila state, Mexico, on Monday, Sept. 20, 2021. The U.S. flew Haitians camped in a Texas border town back to their homeland Sunday and tried blocking others from crossing the border from Mexico in a massive show of force that signaled the beginning of what could be one of America's swiftest, large-scale expulsions of migrants or refugees in decades, reports the Associated Press. Photographer: Eric Thayer/Bloomberg , Bloomberg

(Bloomberg) -- U.S. officials encountered more than 1.7 million migrants crossing the border with Mexico over the past year—a record number likely to escalate Republican attacks on the Biden administration’s handling of immigration.

U.S. Customs and Border Protection reported 1.73 million southwest border encounters overall, but many were making repeat attempts, the agency said. CBP’s Border Patrol conducted 1.66 million of the apprehensions, the highest number agents have ever recorded at the U.S.-Mexico border

“CBP will continue its work to ensure safety and security at our borders, while managing a fair and orderly immigration system, and facilitating the legitimate trade and travel that is vital to the American economy,” Acting Commissioner Troy Miller said in a statement.

Monthly updates this year have fueled criticism and public outrage from Republicans, who are seeking to make border security a key campaign issue against Democrats in next year’s midterm elections, with control of both chambers of Congress at stake.

“For some strange reason people still seem to say this is some kind of cyclical event,” Sen. James Lankford (Okla.), who’s up for re-election next year, said during a recent press conference with fellow Republicans. “This is a problem based simply on the policy changes that happened on January the 20th of this year.”

CBP encounters at the southern border decreased from August to September. A majority of migrants were expelled from the U.S.

Biden administration officials have acknowledged unprecedented challenges at the border but resisted calling it a crisis—instead attempting to project an image of control and long-term planning.

Vice President Kamala Harris is leading the administration’s “root causes” strategy to address why so many people leave their homes in the Northern Triangle countries of Guatemala, El Salvador, and Honduras, and elsewhere.

The majority of migrants apprehended in fiscal 2021, almost 1.4 million, hailed from Mexico and the Northern Triangle. But the coronavirus spurred of hundreds of thousands of people, primarily from Latin America and the Caribbean, to head for north, complicating the efforts of the Biden administration.

Brazilians, Cubans, Ecuadorans, Haitians, Nicaraguans and Venezuelans were the main contributors to influx of people as the virus ravaged economies across the region and governments struggled to inoculate populations. Some 378,000 people, or nearly 22 percent of all migrants, came from countries other than Mexico and the Northern Triangle in fiscal 2021.

Homeland Security Secretary Alejandro Mayorkas has said his department is strategically employing enforcement tools and working to rebuild U.S. asylum and refugee programs that the Trump administration “dismantled.” The secretary, in a recent congressional hearing, pointed to a dip in migrant encounters in August as evidence that enforcement measures in the long-term plan are starting to deter attempted crossings.

The administration’s explanations have fallen flat on both sides of the aisle. Republicans dismiss any short-term improvements as insignificant and say the annual numbers paint a picture of a government that’s lost control of its borders.

“It is time to admit that there is a crisis at the southern border and that the men and women of the United States Border Patrol are overwhelmed,” Republicans on the House Homeland Security Committee told Biden in an Oct. 4 letter.

They’re calling on the Biden administration to restart construction of a U.S.-Mexico border wall; keep pandemic-related migrant restrictions in place; and reinstate the Trump-era “Remain in Mexico” policy requiring asylum-seekers to stay there while their claims are heard.

Democrats and liberal allies of the Biden administration, meanwhile, have increasingly expressed frustration that the Department of Homeland Security and other agencies have kept several Trump-era policies in place.

They’re especially concerned about the continued use of Title 42, a public health order the Trump administration initially employed to allow border officials to turn away migrants during the Covid-19 pandemic. Mass repatriation flights to Haiti under Title 42 prompted a bigger swell of criticism from party leaders and advocacy groups.

Senate Majority Leader Chuck Schumer (D-N.Y.) in September called on Biden to end the policy, arguing that it interferes with asylum-seekers’ rights to due process.

Yet federal courts have tied the administration’s hands on many fronts as lawsuits from states, immigrants, and advocacy groups create legal whiplash. A district court, for example, ordered the government to stop expelling migrant families under Title 42, but an appeals court quickly stepped in and blocked that order.

Federal judges also appear to control the fate of the “Remain in Mexico” policy, which Biden halted immediately after taking office. A court concluded that decision was unlawful and ordered the Biden administration to reinstate the program. The Department of Homeland Security is working to do that, pending Mexico’s approval. It’s simultaneously crafting a new agency order to cancel the program—a move that’s expected to trigger another round of litigation.