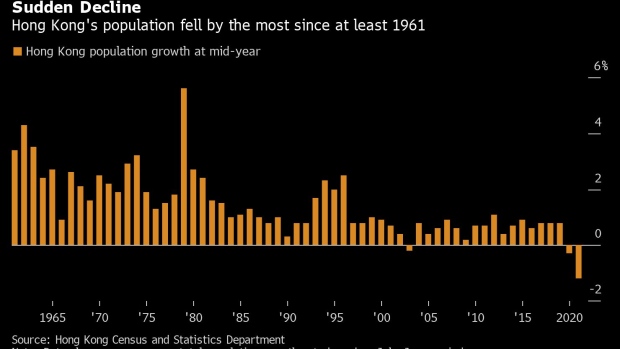 Isolation units at the Penny's Bay Quarantine Centre in Hong Kong, China, on Tuesday, Dec. 14, 2021. The Hong Kong government declared that travelers returning from the U.S. and the U.K have to spend a week of quarantine in a spartan isolation camp, before serving out another 14 days in a hotel room they pay for themselves. , Bloomberg

(Bloomberg) -- Hong Kong’s status as a magnet for international financiers is cratering as firms struggle to coax traders and bankers to move to the once vibrant trading hub.

Seeking to fill jobs, headhunters are finding they can only recruit candidates who are already in Hong Kong. The crunch comes as the former British colony is dealing with a growing outflow of expatriates who are frustrated with the city’s strict zero-Covid policies. They’re abandoning a city where low taxes, ease of travel, top class schools and a vibrant night-life once proved a potent lure.

For some candidates, “no amount of money is going to convince a candidate to go to Hong Kong,” said Jason Kennedy, founder of London-based recruiting firm Kennedy Group, which hires traders for hedge funds with offices across Asia. “They would rather choose Singapore. It’s a lifestyle balance, even for traders.”

Business groups have been sounding a warning that the city’s status as a financial center is increasingly at risk and all signs now point to an accelerating outflow of experienced bankers and traders. Visas for financial service workers halved from 2018 to 2020 and probably declined further last year, according to government data through September. Officials this month clamped down further as omicron emerged, forcing close contacts into government camps, closing schools and banning flights, on top of the 21 days of mandated quarantine for incoming travelers. Authorities maintain their top priority is to keep infections and deaths at a minimum, as well as first opening travel to mainland China.

For the city’s economy, the stakes are high. Hong Kong has more than 273,000 financial services jobs, and has long been the Asian hub for banking giants such as HSBC Holdings Plc and Goldman Sachs Group Inc. It’s also the largest U.S. dollar funding center after London and New York, with banking assets equal to nine times its gross domestic product, according to the Hong Kong Monetary Authority.

The American Chamber of Commerce in Hong Kong said this week international travel restrictions are now the top concern for companies in a survey. The quarantine rules for travelers make it difficult for head offices to operate, with about 44% of respondents saying they are likely to leave.

The biggest bank in the city, HSBC, last year showed its continued commitment to the city by relocating one of its global co-heads of investment banking, as well as its heads of commercial banking and wealth from London. Still, one of them, Greg Guyett, the co-chief executive of the investment bank, is for now stuck in London partly due to the quarantine rules. The lender has also warned its Hong Kong traders that one of the main risks to business continuity is now the city’s quarantine policy.

Some of those that have chosen to leave the city briefly have experienced a whirlwind of calamities upon return. One banker considering joining the exodus is Nicolas, who spoke on condition only his first name be used. He tested positive in Europe in December and recovered but tested positive again on return to Hong Kong and was placed in the hospital and then at a make-shift quarantine center at the Asia World Expo. His two-year-old daughter also tested positive and was sent to hospital, while his wife was sent to Penny’s Bay quarantine center for two weeks as a close contact. He’s now considering leaving this year.

The brain drain extends beyond the finance industry. A Beijing orchestrated crackdown on freedoms in the city that followed widespread protests in 2019 has caused an outflow of teachers, journalists, artists and intellectuals, which will impact quality of life in the city for years to come.

Even so, some headhunters in Hong Kong said the city will remain an attractive destination for some candidates and will always remain a financial hub because of its proximity to mainland China.

William Bown, principal of financial services at search firm Heidrick & Struggles in Hong Kong, said he’s speaking to candidates open to moving to Hong Kong. “If China is important to your business - and for most bankers in the region it is - you want to remain close,” he said.

In a speech this month, Hong Kong Chief Executive Carrie Lam touted its international role, saying the city was an “ideal destination” for international money, underpinned by “the rule of law, an independent judiciary, highly open and internationalised markets, a deep liquidity pool, and the free flow of people, information and capital.”

But headhunters and consultants warn that the depletion of talent from Hong Kong is getting more acute by the month. International financial firms that for decades have used Hong Kong as a gateway to China will be gradually decreasing their reliance on international staff, recruiters said. As China has opened its financial markets, lenders have also been speeding up a relocation of bankers to the mainland from Hong Kong, partly spurred on by the quarantine restrictions. The city last year lost its third place in the global initial public offering rankings to Shanghai.

“We will likely see greater consequences if the flight ban and quarantine restrictions continue in six months’ time,” said Loretta Chan, Hong Kong-based partner at executive search firm Wellesley Partners. “We don’t foresee anything will happen immediately or even immediately after the bonus cycle, but certainly people are formulating contingency plans to leave Hong Kong permanently.”

One of the big winners, for now, has been Singapore. The city state is in close to proximity to both China and other key Asian markets and also offers a top marginal tax rate of 22% that is far below levels in Europe and the U.S. Hong Kong’s, by contrast, is about 15%.

For private bankers, being able to travel is key. Trying to win new business in other parts of Asia is extremely difficult since most clients want to meet in person before they make a decision to hand over hundreds of millions of dollars, said two bankers working at European firms in Hong Kong, who asked not be identified discussing internal businesses.

Wall Street giants including Morgan Stanley, which runs one of the largest private banks in Asia, JPMorgan Chase & Co. and Credit Suisse Group AG, have all been adding staff in Singapore over the past year to serve a growing number of Chinese clients, some of whom are also moving money out of Hong Kong.

Singapore, which is largely seeking to live alongside the virus, is also serving as a way station for bankers struggling to get back into Hong Kong. At least a dozen Hong Kong-based managing directors at banks, including Goldman, Morgan Stanley and UBS Group AG, have at least become temporarily stranded by the travel restrictions, said people familiar with the matter last week. Those stuck include division heads in investment banking, wealth and asset management and other functions, the people said.

Authorities in Hong Kong have made some concessions, and even delivered care packages to bankers stuck in quarantine to quell their anger. JPMorgan Chief Executive Officer Jamie Dimon was granted an exemption from the rules during a short trip in November in his first visit to Asia in 2 1/2 years.

But Hong Kong is now resorting to extreme measures to contain its latest outbreak, even ordering a cull of thousands of hamsters on concern over cross infections. That doesn’t bode well for the city’s post-British experiment as a lively connection between the West and China.

“Hong Kong used to be a rare bridge between China and the rest of the world,” said Isaac Stone Fish, founder of Strategy Risks, which specializes in corporate relationships with China. “But, over the last few years, Beijing has retracted one side of that bridge, and Hong Kong is now increasingly just connected to the mainland.”